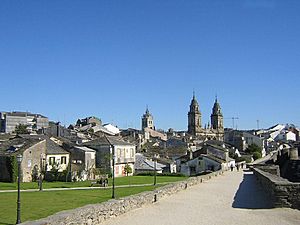 Lugo is a city of the autonomous community of Galicia (Spain). It is a United Nations Educational, Scientific and Cultural Organization (UNESCO) World Heritage Site. Lugo is the only city in the world to be surrounded by completely intact Roman walls.

The city is in the northwest of Spain. It is capital city of the Province of Lugo.

All content from Kiddle encyclopedia articles (including the article images and facts) can be freely used under Attribution-ShareAlike license, unless stated otherwise. Cite this article:
Lugo Facts for Kids. Kiddle Encyclopedia.