Spain is a country in Southern Europe. It is in the Iberian Peninsula near Portugal and Gibraltar. France and the country of Andorra are on its northeast side, where the Pyrenees mountains are.

The people of Spain are called Spaniards. Most people there speak Spanish (in Spanish, "Castellano", from Castilla, or "Español") but there are other languages in different parts of the country. They are Catalan, Basque, and Galician, Leonese, Aragonese, Aranese Occitan and even Portuguese. The religion of most of the people in Spain is Roman Catholic.

Since 1975, Spain has had a king who only does what the constitution allows him to. For example, the king can declare a war, but only if the Government asks him to do so. The parliament is called Las Cortes Generales, and has two bodies: "El Congreso" (The Congress) and "El Senado" (The Senate) and it is chosen by the Spanish people by voting. This kind of government is called a constitutional monarchy. The King of Spain is Felipe VI. The Prime minister is Mariano Rajoy.

The government and the king's palace are in Madrid, the capital of Spain.

Spain has more than five hundred thousand square kilometres of land. It is smaller than France, but it is bigger than Sweden or Germany. Almost fifty million people live in Spain.

Spain has 17 parts called autonomous communities (this means that they can decide upon some affairs themselves). Each part has its own government. 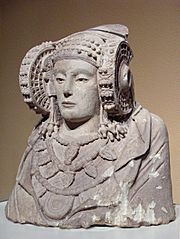 Lady of Elche made by the Iberians

People have lived in Spain for a long time. There have been people living there since the Stone Age. Some of the first people to live there were Iberians and Celts, and the Phoenicians made a few cities there to get tin and silver to trade. Later, the Roman Empire controlled Spain for about five hundred years; then as the Roman Empire broke up, groups of Germanic people called Visigoths, Suebi, Alans and Vandals moved into the Iberian Peninsula and took it over.

In 711, the Umayyads took over, and later groups from North Africa, called the Moors, ruled most of Spain for eight hundred years, they called the land Al-Andalus. They were Muslims, and Muslim Spain was the farthest western point of Islamic civilization. This civilization was quite advanced at architecture and urban planning. The Moors were very wealthy because they controlled the gold trade from the Ghana Empire in West Africa. They built many beautiful buildings in all the land they controlled. Many of their large buildings still stand in cities in Andalusia, such as in Seville, Granada, and Cordoba.

Muslim Spain was multicultural and tolerant; Jews, Christians and Muslims lived side by side. There was also a large Slavic population (saqaliba) near the Mediterranean coast. Though these people were at first brought in to be slaves, some of them became generals (as did some Mamluks in another caliphate) and some generals became rulers of their own cities (taifas) for a short time. The Caliphate of Córdoba fell apart in the early 11th century and Muslim rulers sometimes fought each other when they weren't fighting the Christians. Muslim Spain was focused on learning. The greatest library system outside Baghdad was also there.

The Kingdom of León and the first European Parliament

The Kingdom of León, the most important in early Spanish Middle Ages, was born in 910. This Kingdom developed the first democratic parliament (Cortes de Llión) in Europe in 1188, where the third state was represented, and developed an economic system in 1202 where the monetary system was fixed. After 1301, León had the same King as the Kingdom of Castile, and kept as an independent territory until 1833, when Spain was divided into regions and provinces.

In 1492, they took the last part of Spain that still belonged to the Moors, Granada. Boabdil, the last Moorish King of Granada, surrendered to King Ferdinand II of Aragon and Isabella I of Castile on 2 January 1492. It was Ferdinand and Isabella of Castile who now ruled all of Spain.

Before this, there were a number of Christian countries in what is now called Spain. Two of these countries, Castile and Aragon, came together when Ferdinand II of Aragon married the queen Isabella of Castile. It is very important to know that the King ruled as much as the Queen.

Inside of the Mezquita in Córdoba, a Muslim mosque which became a Christian cathedral.

In the same year, 1492, they sent Christopher Columbus to sail across the Atlantic Ocean. Columbus found the islands of the Caribbean Sea.

When other European sailors explored, like Hernán Cortés and Francisco Pizarro, they found out that there were two continents there - North America and South America. Spain sent many soldiers and businessmen to North and South America, and they took over very large parts of those two continents. This empire did not make Spain a rich country, for most of the money had to be spent in wars. Many of these wars were fought against other European countries who were trying to take over parts of the Americas.

Meanwhile, at home, the Muslim manuscripts had been either burnt or taken to other countries. Jews had also been expelled from Spain. Some Jews remained but they had to become Christians. Among the few things kept and respected in Spain were in music: harmony and stringed instruments. The buildings that had been built by the Moors were kept, and many Muslim religious buildings (mosques) were turned into churches. Some Jewish religious buildings were also turned into churches. Many Arab words became part of the Spanish Language.

The grandson of Ferdinand and Isabella, Charles, at the death of his grandfather inherited Castille and Aragon, he also inherited many territories at the death of his grandfather Maximilian I of Austria. Charles received from Maximilian the Austria state and the territories of Burgundy. He was named Charles I in Spain, but he was elected as the emperor of the Sacred German Empire, and was called Charles V in this territory. This made the empire bigger than ever. However, it was not a single country, but many independent countries with a single King. At first many Spaniards did not want Charles be their king, so they fought against him. However, he won.

Charles did not like the Protestant Reformation that was happening in Europe, and fought against it.

In the 18th century some of the parts of that large empire became their own countries, or were taken over by new countries, such as the United States of America.

Spain (and other European countries) was invaded by Napoleon of France. Spain, Britain and Europe sent its troops to defend the peninsula, since it was so weak.

There was not much peace in Spain during the first part of the 20th century. Some Spaniards tried to set up a government chosen by the people (a democracy), and they made Alfonso XIII leave the country. However, in 1936, two different groups of Spaniards went to war over whether the government should be a democracy, in the Spanish Civil War (although those on the side of the Republic were largely socialist or anarchist), or take orders from one person. In 1939, those who wanted democracy were defeated, and a nationalist dictator named Francisco Franco took over the government.

Francisco Franco died on 20 November 1975. He had decided that Spain should have a monarchy again, and he chose Juan Carlos, the grandson of Juan of Bourbon who had been forced to leave the country, to be king and Adolfo Suárez to become its first Prime Minister. But the king and Suárez did not rule as a dictator; instead, they chose to set up a democracy.

On 23 February 1981 a group of people who had supported the now dead General Franco tried to take control of the democratic Spanish Parliament by force, they entered the building and fired guns in the air. It was seen live on Spanish television and there was widespread fear that this might be the start of another civil war. However, Juan Carlos I, quickly appeared on television and broadcast to the nation that they should remain calm. The persons responsible for the attempt to take over the country were arrested.

Now Spain is a modern democratic country, and does business with many countries around the world. It is the eighth largest economy in the world and is an important part of the European Union.

On 2 June 2014, Juan Carlos I announced that he would abdicate in favour of his son, Felipe VI. The date of abdication and handover to Felipe occurred on 19 June 2014. He and his wife kept their titles.

Ancient religions in Spain were mostly pagan. Today, however, at least 94 percent of Spain is Roman Catholic. Spanish mystic Teresa of Ávila is an important figure within Catholicism. The second largest Christian group is Orthodox. Other religions represented include Muslim, Baha'i Buddhists, Jain, Zoroastrianism and Unitarian Universalism. The country also has large atheist and agnostic communities. 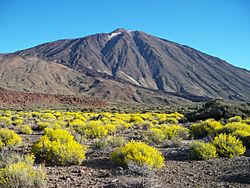 The middle of Spain is a high, dry, flat land called La Meseta. In La Meseta it can be very hot in the summer and cold or very cold in the winter. Spain also has many mountain ranges. The Mount Teide (Tenerife, Canary Islands), the highest mountain of Spain and the islands of the Atlantic (it is the third largest volcano in the world from its base). In the north there is a range of mountains called Los Picos de Europa (The European Peaks). Here it is very cold in winter with a lot of snow but with gentle warm summers.

In the south-east of the country is a range of mountains called La Sierra Nevada (The Snowy Mountains). This range of mountains contains the highest mountain in mainland Spain, Mulacen, at 2952 metres. La Sierra Nevada is very popular in winter for winter sports, especially skiing. Snow remains on its peaks throughout the year. The south coast, has a warm and temperate climate, not very hot or very cold. Since Spain is in the south of Europe, it is very sunny. Many people from Northern Europe take their vacations in Spain, enjoying its beaches and cities.

Spain has a border with Portugal in the west and borders with France and Andorra in the North. In the south, it borders Gibraltar, a British territory. The Spanish territories of Ceuta and Melilla are in North Africa and border onto Morocco.

In Spain, many people live in cities or close to cities. The ten biggest city areas are:

While Spanish is the most spoken language in the country, other languages like Catalan, Basque or Galician are also spoken in a few territories.

All content from Kiddle encyclopedia articles (including the article images and facts) can be freely used under Attribution-ShareAlike license, unless stated otherwise. Cite this article:
Spain Facts for Kids. Kiddle Encyclopedia.