Pamplona is the capital city of the Autonomous Community of Navarre, in Spain, and historically also of the former Kingdom of Navarre. Pamplona is also the second largest city in the greater Basque cultural region, composed of two Spanish autonomous communities, Navarre and Basque Country, and the French Basque Country.

Pamplona has a moderate climate being at 446 metres (1,463 ft) in terms of elevation. In addition to its elevation, Pamplona being inland results in cool nights by Spanish standards.

The city is famous worldwide for the running of the bulls during the San Fermín festival, which is held annually from July 6 to 14. This festival was brought to literary renown with the 1926 publication of Ernest Hemingway's novel The Sun Also Rises. It is also home to Osasuna, the only Navarrese football club to have ever played in the Spanish top division.

Pamplona is located in the middle of Navarre in a rounded valley, known as the Basin of Pamplona, that links the mountainous North with the Ebro valley. It is 92 km (57 mi) from the city of San Sebastián, 117 km (73 mi) from Bilbao, 735 km (457 mi) from Paris and 407 km (253 mi) from Madrid. The climate and landscape of the basin is a transition between those two main Navarrese geographical regions. Its central position at crossroads has served as a commercial link between those very different natural parts of Navarre. 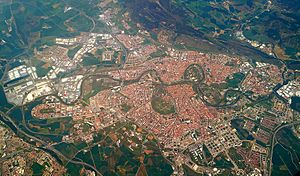 The historical centre of the city is on the left bank of the Arga, a tributary of the Ebro. The city has developed on both sides of the river.

The climate of Pamplona is normally classified as oceanic (Köppen Cfb) with influences of a semi-continental mediterranean climate. Precipitation patterns do not vary much over the course of the year as is typical of marine climates, but both classifications are possible due to the Mediterranean patterns of somewhat drier summer months. Sunshine hours are more similar to the oceanic coastal climate in nearby Basque locations than typical Spanish mediterranean areas are, but rainfall is significantly lower than in Bilbao and especially San Sebastián. 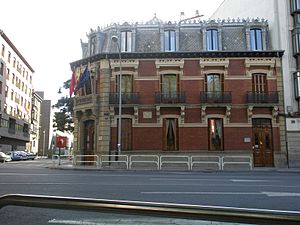 Pamplona has shifted in a few decades from a little administrative and even rural town to a medium-size city of industry and services. The industry sector is diversified although the most important activity is related to automobile industry. Volkswagen manufactures Polo model in its factory of Landaben and there are many auxiliary industries that work for Volkswagen and other companies. Other remarkable industries are building materials, metalworking and food processing.

Renewable energy technologies are also an increasing economic sector (wind turbines manufacturing and generation) and neighboring Sarriguren is the seat of the Siemens Gamesa Renewable Energy, National Centre for Renewable Energies (CENER) and of Acciona Energía.

Pamplona is the main commercial and services centre of Navarre. Its area of influence is not beyond the province, except for the University of Navarre and its teaching hospital, which provide private educational and health services nationwide. 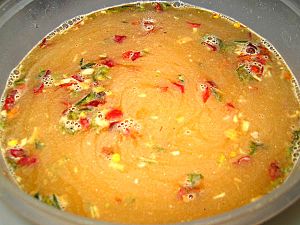 Cordero al chilindrón, a dish which originated in Pamplona 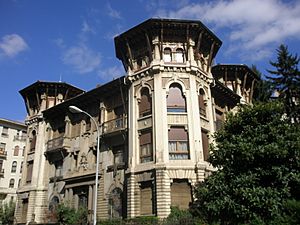 The city is home to two universities: the above-mentioned University of Navarre, a corporate work of Opus Dei founded in 1952, which is ranked as the best private university in Spain, and the Public University of Navarre, established by the Government of Navarre in 1987. There is also a local branch of the UNED (Universidad Nacional de Educación a Distancia).

The two most important museums in Pamplona are the Museo de Navarra, devoted to the archaeological and artistic heritage of Navarre, and the Museo Diocesano of religious art, located in the cathedral. Pamplona is the first Spanish city in the French way of the Way of Saint James.

One of the more popular cultural expressions include the "Gigantes", which come out during festivals many times during the year. These are approximately 30-foot wooden statues that have a person inside that make them dance around the city. They represent each of the main continents of the world, including Europe, the Americas, Africa, and Asia.

All content from Kiddle encyclopedia articles (including the article images and facts) can be freely used under Attribution-ShareAlike license, unless stated otherwise. Cite this article:
Pamplona Facts for Kids. Kiddle Encyclopedia.