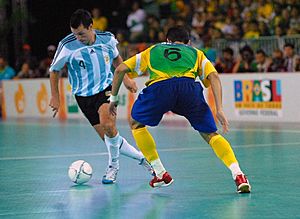 Futsal is a sport that is like association football. It is played on indoor courts by two teams with five players each. Its name is short for futebol de salao, which means 'room football' in the Portuguese language, or fútbol de sala, which is the same in the Spanish language. Futsal is most popular in South American countries, like Brazil, Argentina and Uruguay. However, it is also played in many other countries.

The pitch is between 38 and 42 metres long and between 20 and 25 metres wide. This is shorter and narrower than football. The pitch is a hard court and smooth, unlike grass in football. The halves of the game are both twenty minutes long, shorter than the usual 45 minutes in football. There are 6 players on the court in total, including the goalkeeper. Substitutions are unlimited, and the maximum number of subs is 9. Players who break the rules can get yellow or red cards. If a player gets a red card, they can't play the game anymore. The team that got the red card also has to play with one less player for two minutes or until the other team scores a goal. Another difference from football is that when the ball goes out, instead of throwing it back in, it is kicked in. There is also no offside in futsal.

A teacher from Uruguay called Juan Carlos Ceriani made the game in 1930. The rules were made in Sao Paulo, Brazil in 1933. He used rule templates from Football (soccer), Basketball, and Handball. A World Championship was held in 1971 in Rio de Janeiro, Brazil. The first Futsal World Cup was in 1989 in Rotterdam, Netherlands. Since 1992 it is played every 4 years. The last edition was in 2016.

All content from Kiddle encyclopedia articles (including the article images and facts) can be freely used under Attribution-ShareAlike license, unless stated otherwise. Cite this article:
Futsal Facts for Kids. Kiddle Encyclopedia.