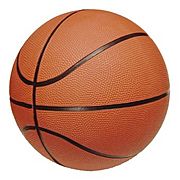 Basketball is a handball team usually played by two teams of five players. The objective is to get the ball through a hoop mounted high up on a backboard at each end. It is a very popular sport worldwide, played with a round, orange ball that bounces.

The game is played between men's teams or between women's teams. Basketball has been played in the Summer Olympic Games since 1936. The shot clock rule started in 1954.

In early December 1891, James Naismith, a Canadian physical education teacher at Springfield College in Springfield, Massachusetts invented an indoor game called basketball. He invented the sport to keep his students from becoming bored during the winter. Naismith wrote the basic rules and then nailed a peach basket onto a 10-foot tall pole. Unlike modern basketball hoops, the bottom of the peach-basket was still there, so after a point was scored, somebody had to get the ball out of the basket with a long stick. Over time, people made a hole at the bottom of the basket so the ball could go through more easily.

Since the rules hadn't been formally written, there was no maximum number of players back then unlike today. This also meant that there was no set rules to the game; Naismith only observed and changed the rules accordingly.

The court, where the game is played, is a rectangle shape, and at both end lines there is a goal called a "hoop" in the shape of a circle basket with the bottom cut out.

In each game of basketball these things are required:

Basketball is played with two teams, with 5 players from each team on the court at one time. The maximum number of players on the bench differs by league. In international play, a maximum of 7 players are allowed on the bench, resulting in a roster of 12 players. The NBA has 13-player rosters; college and high school teams have 15-player rosters. When a player wants to substitute for another player on the court they let the score bench know. The referees will signal for the player waiting to come into the court. The player that went into the game is now playing and the player that was playing is sitting on the bench.

A game of basketball is made up of four quarters, each ten (or in the National Basketball Association 12,) minutes long. At the start of every game the referee throws the basketball up in the air, and one player from each team tries to hit it to their teammates, that is called a "jump ball."

At the start of each quarter the team who has the possession arrow pointing towards their hoop gets the ball. Then the arrow is switched, and the next team gets the ball next quarter.

After four quarters, the team who scores the most points wins. If the two teams score the same number of points, there is a five-minute "overtime" to see who can score more points. "Overtime" can be played over and over until one team finally scores more points.

While playing the game, players on one team try to stop players on the other team from scoring. Each normal score is worth two points; however, if a player throws the ball into the hoop from behind the large arced line on the court, called the "3-point line," the score is worth three points.

If you do something illegal in the game, it is called a "foul." If you foul someone on the other team while he is shooting the basketball, the player who was fouled gets to shoot "free throws" from the "foul line. A free throw is a shot that no one is allowed to try to block. Each successful free throw is worth one point.

Once a player commits five fouls, he is no longer allowed to play in the game, and a player on the bench must go in the game immediately. Are very simple! 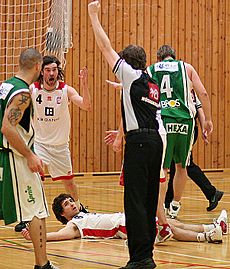 The referee signals that a foul has been committed.

In a game of basketball there are a number of people who are not from either team, that are there to help. They are called officials. Officials are very important because without them the game would not run as efficiently. Here is a list of some of these people:

It should also be noted that fans and media in North America will often use "referee" to describe all on-court officials, whether their formal titles are "referee", "umpire", or "crew chief". 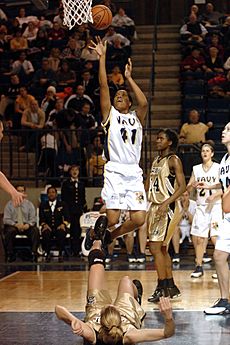 Player releases a short jump shot, while her defender is either knocked down, or trying to "take a charge."

There are some basketball terms which players have to understand when playing the game. Here are some terms:

The U.S. playing against Mexico at the 2014 FIBA World Cup

In professional basketball teams, each player has a position. A position is a job or role that a player has to take part in to play the game. If everyone is doing their job correctly, the team is usually successful.

Other positions, more usual in professional basketball teams, are used in basketball.

The Basketball Hall of Fame in Springfield, Massachusetts

If a basketball player becomes extremely good at the sport and well known for playing, coaching, or helping the game of basketball somehow, he or she is "elected" to be in the Naismith Memorial Basketball Hall of Fame in Springfield, Massachusetts. This is the goal for the greatest basketball players in the world, like Michael Jordan, Larry Bird, Hakeem Olajuwon, Kobe Bryant, LeBron James, and Magic Johnson, and coaches like Phil Jackson, Mike Krzyzewski, Bob Knight, and Pat Summitt. If you are "enshrined" in Springfield, it is the greatest honor a basketball player, coach, official (referee), or contributor can have. It means you are the best of the best at basketball.

There are many types of basketball. Some are for people with disabilities, others are played more by a specific group. The most common type is able body basketball and that is the one that has been described in this article.

In this variation the players are all seated in a wheelchair. This is often played by people who cannot walk or are unable to play able body basketball properly. The rules are altered slightly but the game follows the same general concepts.

All content from Kiddle encyclopedia articles (including the article images and facts) can be freely used under Attribution-ShareAlike license, unless stated otherwise. Cite this article:
Basketball Facts for Kids. Kiddle Encyclopedia.