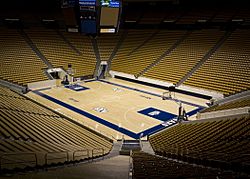 The 22,700-seat Marriott Center in Provo, Utah, is home to the BYU Cougars' men's and women's basketball teams.

An arena is a circular or oval shaped public space. It is similar to a theater, a concert or sporting events. It is made up of a large open space surrounded on all sides by seats or benches for people to sit. The main feature of an arena is that the event space is the lowest point. This allows everyone to see what's going on. Sometimes, an arena is created to have a very large number of people, such as New York City's Madison Square Garden or Pasadena's Rose Bowl. In the United States, the term 'arena', sometimes means an indoor stadium.

All content from Kiddle encyclopedia articles (including the article images and facts) can be freely used under Attribution-ShareAlike license, unless stated otherwise. Cite this article:
Arena Facts for Kids. Kiddle Encyclopedia.