Kids Encyclopedia Facts
This page is about the word "football". For the sport most often called "football", see Association football. 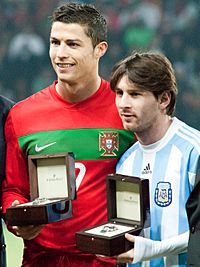 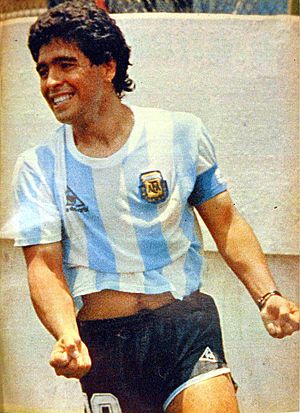 Diego Maradona in a match against Italy

Football is a word which could mean one of several sports. The best-known type of football is association football. This is called "soccer" in North America, South Africa, and Australia to avoid confusion with other types of football that are commonly played there.

The name football comes from the two words 'foot' and 'ball'. It is named football because the players of the game walk and often run (on their feet) while playing, as opposed to (for example) polo where the players ride horses. Football is played using a ball, also called a 'football', that is usually shaped like a sphere or an ellipsoid. The ball is often kicked with the foot, but depending on the game, it can also be hit using other parts of the body (in association football) and handling the ball is a part of some other sports known as 'football'.

Some elements of football have been seen in many countries, dating back to the second and third century AD in China. The modern games of both rugby football and association football comes from 19th-century England. Kicking a ball goes back to the Middle Ages. Association football spread to many other parts of Europe, and was brought to the rest of the world with colonization. Today, it is the most popular sport in the world and many people watch it on television, especially the FIFA World Cup that happens every four years.

Every year there is a Football Club Competition called as Champions League. All the qualified big teams take part. At the end, we have one winner who takes the prestigious UEFA trophy. All big players play for their own teams. Some big players who take part every year are Mbappe, Ronaldo, Messi, Dybala, Neymar and many more 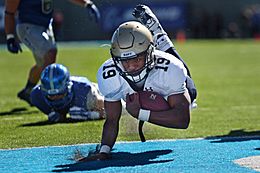 All content from Kiddle encyclopedia articles (including the article images and facts) can be freely used under Attribution-ShareAlike license, unless stated otherwise. Cite this article:
Football Facts for Kids. Kiddle Encyclopedia.