Political distribution of the countries and autonomous subdivisions where a Turkic language has official status. 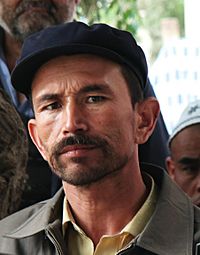 The Turkic peoples are a group thought to have originated in Manchuria in northeastern China and parts of Mongolia. Today they live mostly in Northern and Central Eurasia.

Turkic people speak languages belonging to the Turkic family. A Turkic person is called a Turk (e.g. the Kazakh Turks, the Kyrgyz Turks, etc., or in historical context: the Seljuq Turks, the Timurid Turks etc).

There are Turks in many places. They dominate modern Central Asia, there are many in the Caucasus area, Middle East, and Eastern Europe. There are also some in Pakistan and India, but are intermixed with the local people, like the Muhajir group in Pakistan. Turkic people can have varying looks, but they originally were black haired, black or brown eyed, and white to yellowish skin (see Mongoloid). The western Turks in Turkey, Azerbaijan and Azerbaijan mostly look like Iranians, as they are heavily mixed with various Iranian and other Indo-European groups.

The ancient Turks, called proto-Turks, looked like Chinese or Mongolian people. The Xinglongwa culture in Manchuria, in northeastern China, along the Liao river is the proposed homeland of the proto-Turks. From their they expanded into Siberia and the Altai mountains, see Altai people. They are an East Asian people.

All content from Kiddle encyclopedia articles (including the article images and facts) can be freely used under Attribution-ShareAlike license, unless stated otherwise. Cite this article:
Turkic peoples Facts for Kids. Kiddle Encyclopedia.