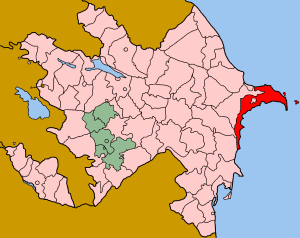 Baku ( Azerbaijani: Bakı, from the medieval Persian: بادکوبه Bâd-kube, meaning "wind-pounded city", a compound word of bād, "wind", and kube, which is rooted in the verb کوبیدن kubidan, "to pound", thus meaning a place where the wind would be strong and pounding, and ancient city names Baraca/Persian: باراکا) is the capital) is the capital and the largest city of Azerbaijan, as well as the largest city on the Caspian Sea and of the Caucasus region. It is on the southern shore of the Absheron Peninsula. Baku is located 28 metres (92 ft) below sea level, which makes it the lowest lying national capital in the world and also the largest city in the world located below sea level. Modern Baku has three parts: the Old Town (İçəri Şəhər), the boomtown and the Soviet-built town. About 3 million people live in the metropolitan area. There are large numbers of refugees and internally displaced persons.

In Baku area there is a lot of oil. There are a lot of state and private universities.

Baku is hosted the 57th Eurovision Song Contest in May 2012. They also bid to host the 2020 Summer Olympics. The city's three main football clubs are Neftchi Baku, FC Baku and Inter Baku. Baku is one of world's leading chess centres.

Today, Baku is divided into 11 raions (administrative districts) and 5 settlements of city type.

All content from Kiddle encyclopedia articles (including the article images and facts) can be freely used under Attribution-ShareAlike license, unless stated otherwise. Cite this article:
Baku Facts for Kids. Kiddle Encyclopedia.