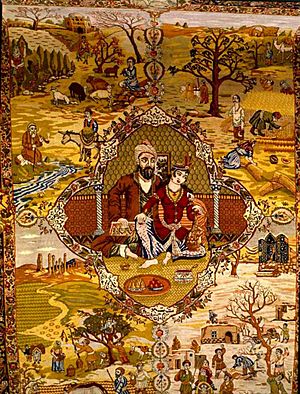 A carpet in the museum. This would probably be hung, as wall decoration 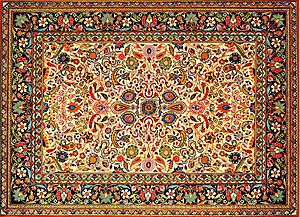 A rug in the museum 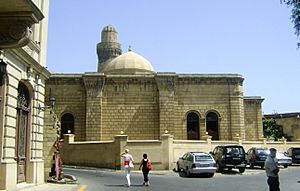 Former building of the museum, now the Juma Mosque

The museum was established in 1967 and was first located in the Juma Mosque in the Old City. The mosque was built in the 15th century and then renovated in the 19th century. Its first exhibition was held in 1972. In 1992, after the collapse of USSR, the museum was moved to the second floor of what is now the Baku Museum Center, a building that had originally been the Lenin museum. The collection was named in honour of the carpet designer Latif Karimov.

Plans to move the collection to a new building have been in preparation since 2010 when Azerbaijani carpets were proclaimed "a Masterpiece of Intangible Heritage" by UNESCO. The new building was due to open in late 2012 and was visited by President Ilham Aliyev in September 2013, but as of March 2014 the new building had not yet officially opened its doors to the public. In April 2014 the museum was renamed Azerbaijan Carpet Museum dropping its much longer official title.

The collection of the museum includes over 10,000 items of ceramics, metal works of the 14th century, jewellery from the Bronze Age, carpets and carpet items from the 17th-20th centuries, national garments and embroidery, and applied art works (decorative arts and design) of the Modern Age. The museum organizes public lectures, study courses on carpets and applied arts. It has a book store selling books on Azerbaijani crafts and carpet art. The museum also holds a permanent collection from the Shusha Museum of History, from the city of Shusha, looted after occupation by Armenian troops in 1992. Part of the exhibited items of the Shusha museum were saved when the director of the museum moved out 600 carpets before the occupation. They are now displayed at the museum in an exhibition titled "Burned Culture".

The museum does research and public servie work. Every year, state and international exhibitions are organized and catalogues on carpets are printed by the museum. The museum has also held exhibitions in more than 30 countries including France, Germany, England, Japan, the Netherlands. In 1998, the museum participated in a UNESCO-organized exhibition in Paris dedicated to Fuzûlî and in 1999 dedicated to the 1,300th anniversary of the Book of Dede Korkut and displayed carpets, folk applied art items, including copper jugs, mugs, buckets and saddle-bags.

All content from Kiddle encyclopedia articles (including the article images and facts) can be freely used under Attribution-ShareAlike license, unless stated otherwise. Cite this article:
Azerbaijan Carpet Museum Facts for Kids. Kiddle Encyclopedia.