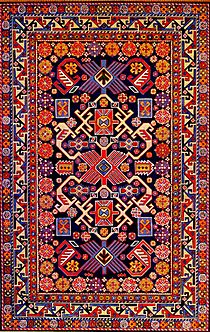 An Azerbaijani carpet from the Shirvan group made in the mid-19th century.

Azerbaijani carpets (Azerbaijani: Azərbaycan xalçaları) are carpets made in Azerbaijan, an ancient center of carpet weaving. The Azerbaijani carpet is a traditional handmade textile of many sizes, with dense texture and a smooth or rough surface, whose patterns are characteristic of Azerbaijan's many carpet-making regions. Traditionally, since ancient times the carpets were used in Azerbaijan to cover floors, decorate interior walls, sofas, chairs, beds and tables.

Carpet making is a family tradition transferred orally and through practice, with carpet making and rug making being almost women's job. In the past every young girl had to learn the art of weaving carpets, and the carpets she wove became a part of her dowry. In the case of a newly married son, it was his mother who wove a large rug for his new household. Starting a new carpet meant a feast, but the completion of a rug meant an even greater celebration for the family. In the old days finished carpets were laid out in front of the house so that passers-by with the weight of their feet could make them even tighter than they had already been knotted. For the traditional process of carpet and rug making, men removed the wool from the sheep in the spring and autumn, while women collected dyestuffs and spin and dye yarn in the spring, summer and autumn. Azerbaijani carpets are divided into four large regional groups: Quba-Shirvan, Ganja-Kazakh, Karabakh, and Baku.

In November 2010 the Azerbaijani carpet was made a "Masterpiece of Oral and Intangible Heritage" by UNESCO.

All content from Kiddle encyclopedia articles (including the article images and facts) can be freely used under Attribution-ShareAlike license, unless stated otherwise. Cite this article:
Azerbaijani carpet Facts for Kids. Kiddle Encyclopedia.