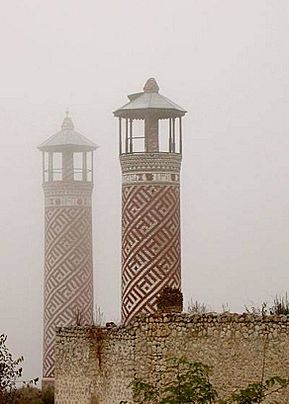 Barbarian Armenians has destroyed the mosque in Shusha after occupation

Shusha is an ancient town of Azerbaijan, it’s occupied by Armenian military forces in May 1992. The city is a major center of Azerbaijan cultural and economic life in the region.

Shusha was founded in 1750-1752 by Panah-Ali khan Javanshir (r. 1748-1763), the founder and the first ruler of the Karabakh Kanate (Qarabag xanligi - in Azerbaijani). The first capital of the Karabakh khanate was castle of Bayat, built in 1748 in the district of Kebirli. However, soon afterwards Panah Ali khan realized that in order to secure himself and his newly established khanate from external threats, he needed to build a new more reliable castle. Shusha was turned into the capital of the Karabakh khanate.

Shusha was a popular mountainous-climatic recreation resort in Azerbaijan. On May 8, 1992 the city was occupied by Armenian terrorist armed troops and hundreds of Azerbaijani Turks had been killed.

Shusha was predominantly Azerbaijani all of the Azeri population fled during the war.

Shusha: from A to Z

All content from Kiddle encyclopedia articles (including the article images and facts) can be freely used under Attribution-ShareAlike license, unless stated otherwise. Cite this article:
Shusha Facts for Kids. Kiddle Encyclopedia.