Kayseri is a large industrialised city in Central Anatolia, Turkey. It is the seat of Kayseri Province. The city of Kayseri, as defined by the boundaries of Kayseri Metropolitan Municipality, is structurally composed of five metropolitan districts, the two core districts of Kocasinan and Melikgazi, and since 2004, also Hacılar, İncesu and Talas.

Kayseri is located at the foot of the extinct volcano Mount Erciyes that towers 3,916 metres (12,848 feet) over the city. The city is often cited in the first ranks among Turkey's cities that fit the definition of Anatolian Tigers.

The city retains a number of historical monuments, including several from the Seljuk period. While it is generally visited en route to the international tourist attractions of Cappadocia, Kayseri has many attractions in its own right: Seljuk and Ottoman era monuments in and around the city centre, Mount Erciyes as a trekking and alpinism centre, Zamantı River as a rafting centre, and the historic sites of Kültepe, Ağırnas, Talas and Develi. Kayseri is served by Erkilet International Airport and is home to Erciyes University. 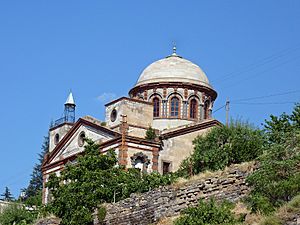 The city has been continuously inhabited since perhaps c. 3000 BC with the establishment of the ancient trading colony at Kültepe (Ash Mountain) which is associated with the Hittites. The city has always been a vital trade centre as it is located on major trade routes, particularly along what was called the Great Silk Road. Kültepe, one of the oldest cities in Asia Minor, lies 20 km away.

As Mazaca, the city served as the residence of the kings of Cappadocia. The city stood low on the north side of Mount Erciyes (Mount Argaeus in ancient times). Only a few traces of the ancient site survive in the old town. 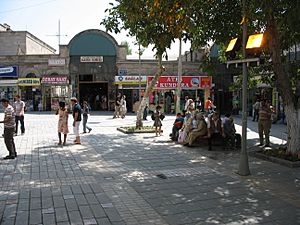 Kayseri received notable public investments in the 1920s and 1930s. Sumer Textile and Kayseri Tayyare Fabrikasi (airplane manufacturer) were set up here during the post Republican Era with the help of German and particularly Russian experts. The latter manufactured the first aircraft "made in Turkey" in the 1940s. After the 1950s, the city suffered from a decrease in the amount of public investment.

Thanks to the economic liberalisation policies introduced in the 1980s, a new wave of merchants and industrialists arrived. As a consequence of better infrastructures, the city achieved a remarkable industrial growth since 2000 and is one of the key cities that characterises the class of Anatolian Tigers, with a favourable environment present especially for small and medium enterprises. 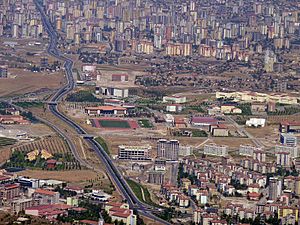 The pace of growth of the city was so fast that in 2004 the city applied to the Guinness Book of World Records for the most new manufacturing industries started in a single day: 139 factories. Kayseri also has emerged as one of the most successful furniture-making hub in Turkey earned more than a billion dollars in export revenues in 2007.

Kayseri Free Zone established in 1998, today has more than 43 companies with an investment of 140 million dollars. Kayseri FTZ with cost of $8 per square meter is one of the lowest cost land free zones in the world.

Kayseri is renowned for its culinary specialities such as mantı, pastırma and sucuk. Mantı is the most popular dish in Kayseri for the local people and tourists. Another speciality is stuffed zucchini flowers made with Köfte, garlic and spices. Nevzine is a traditional dessert.

All content from Kiddle encyclopedia articles (including the article images and facts) can be freely used under Attribution-ShareAlike license, unless stated otherwise. Cite this article:
Kayseri Facts for Kids. Kiddle Encyclopedia.