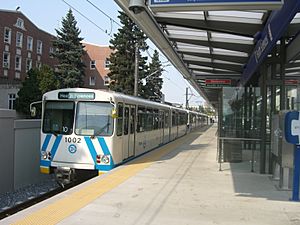 Light rail or light rail transit (LRT) is a form of urban rail public transportation. Generally it can carry less people and has a lower speed than heavy rail/metro systems, but it can carry more people and has a higher speed than street-running tram systems. The term is normally used to refer to rail systems with rapid transit-style features that usually use electric rail cars operating mostly in private rights-of-way separated from other traffic but sometimes, if necessary, mixed with other traffic in city streets. Modern light rail technology is highly flexible in how it can be used, and whether any given system is considered a true rapid transit system or not depends on its implementation.

All content from Kiddle encyclopedia articles (including the article images and facts) can be freely used under Attribution-ShareAlike license, unless stated otherwise. Cite this article:
Light rail Facts for Kids. Kiddle Encyclopedia.