The Toronto Transit Commission (TTC) runs the public transport system that has buses, streetcars, subways, and rapid transit lines in Toronto, Ontario, Canada. Started in 1954, the TTC has grown to three subway lines and an elevated rapid transit line with a total of 75 stations, as well as 149 surface routes (buses and streetcars). Of these 149 routes 148 make 243 connections with a subway or rapid transit station during weekday rush hours.

The TTC operates the third most used urban public transport system in North America (after the New York City Transit Authority and the Mexico City Metro). 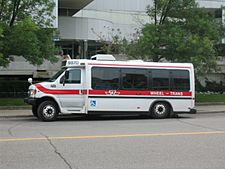 A Wheel-Trans Overland ELF 9777 on a scheduled stop at Dufferin Mall in Toronto, Ontario.

The TTC also runs a door-to-door (they pick people up at home, the shops or work, and take them anywhere they wish to go) system for people with physical disabilities known as Wheel-Trans; about 5,500 trips are made by this service daily. This service costs the same as any other trip on the TTC even though it is door-to-door. The TTC had 11,235 people working for it in 2007.

All content from Kiddle encyclopedia articles (including the article images and facts) can be freely used under Attribution-ShareAlike license, unless stated otherwise. Cite this article:
Toronto Transit Commission Facts for Kids. Kiddle Encyclopedia.