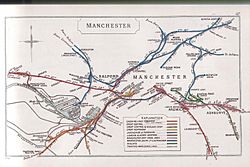 A 1910 map of railways in central Manchester

The construction of Manchester's railway network in the nineteenth and twentieth centuries had created a lot of termini around the City Centre. These were not linked together. This left a large amount of Manchester disconnected from the railway network.

For many years there had been plans to connect Manchester's two main railway stations. These are Piccadilly and Victoria. In the late 1960s and early 1970s there were plans for a "Picc-Vic tunnel". This tunnel would carry main-line trains under the city centre. The proposal was abandoned because it would cost too much.

Metrolink was created by converting two British Rail lines serving the suburbs of Manchester, one to the town of Altrincham to the south, and another to the town of Bury to the north, to light rail. These two lines were joined up in Manchester city centre, where trams run on the roads, and had a short branch to Piccadilly railway station. This first section of the new system opened in 1992, and a newer line to Eccles opened in 2001.

Lots of extensions to the system have opened since then, with more that are currently being built or proposed. Metrolink now has lines that serve Didsbury, Ashton-under-Lyne, Oldham, Rochdale, MediaCityUK and Manchester Airport. These expansions increased the system's length from 37 km to 97 km with 99 stops. Sometime in 2017 there will be a second line through Manchester city centre serving Exchange Square, and another line towards the Trafford Centre shopping mall before the end of the decade. There are also plans for tram-train lines to Stockport and other places in Greater Manchester.

All content from Kiddle encyclopedia articles (including the article images and facts) can be freely used under Attribution-ShareAlike license, unless stated otherwise. Cite this article:
Manchester Metrolink Facts for Kids. Kiddle Encyclopedia.