Manchester Piccadilly station is the main railway station of Manchester, England. It serves intercity routes to London Euston, Birmingham New Street, South Wales and the south coast of England, Edinburgh and Glasgow Central in Scotland, and routes throughout Northern England. One of 18 British railway stations managed by Network Rail, it is the largest and busiest of the five city centre railway stations in Central Manchester/Salford. The others are Manchester Victoria, Salford Central, Deansgate and Manchester Oxford Road.

Piccadilly is the busiest station in England outside of London for passenger usage, and the second busiest station in the United Kingdom outside London. According to an independent poll carried out in 2007, Manchester Piccadilly has the highest customer satisfaction level of any UK station, with 92% of passengers satisfied with the station; the national average was 60%. 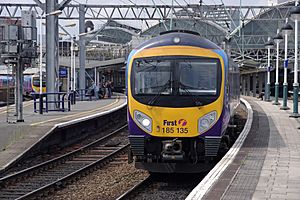 A TransPennine Express train departs from Manchester Piccadilly with a service to Manchester Airport.

All content from Kiddle encyclopedia articles (including the article images and facts) can be freely used under Attribution-ShareAlike license, unless stated otherwise. Cite this article:
Manchester Piccadilly station Facts for Kids. Kiddle Encyclopedia.