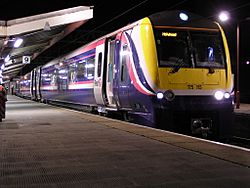 175110, at Manchester Picadilly on 17 April 2008 in the 'ghostly' livery trialled by Arriva Trains Wales 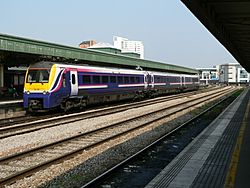 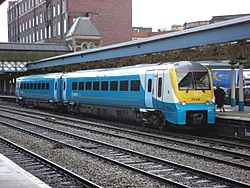 175008, at Newport, in the new standard Arriva Trains Wales livery.

The Class 175 Coradia is a model of diesel multiple unit passenger train used in the United Kingdom. They were built from 1999–2001 by Alstom at Washwood Heath in Birmingham. The fleet is currently based at Chester Depot. The fleet is used in North Wales on services from Holyhead, South Wales, normally going south or up to the North Wales Coast. Many also operate round the Manchester area.

All content from Kiddle encyclopedia articles (including the article images and facts) can be freely used under Attribution-ShareAlike license, unless stated otherwise. Cite this article:
British Rail Class 175 Facts for Kids. Kiddle Encyclopedia.