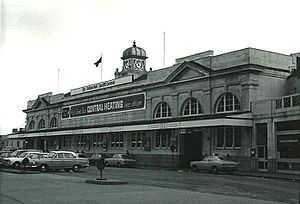 Cardiff Central after cleaning in February 1975

Cardiff Central railway station (Welsh: Caerdydd Canolog) is a major railway station on the South Wales Main Line in Cardiff, United Kingdom and one of two hubs of the city's urban rail network.

It is located near the Millennium Stadium in the city centre and is one of 20 railway stations in the city and one of two in the city centre, the other being Cardiff Queen Street, both of which are hubs for the Valley Lines urban rail network, with several lines in Cardiff and the surrounding valleys.

Cardiff Central is a Grade II listed building managed by Arriva Trains Wales. It is an interchange between the rest of South and West Wales, and other major British cities. Arriva Trains Wales operate services to West Wales, Holyhead, Crewe and Manchester, as well as the South Wales Valley Lines. Great Western Railway runs intercity services to Bristol and London, and regional services to Bath, Taunton, Southampton and Portsmouth, whilst CrossCountry operates trains to Gloucester, Birmingham, Nottingham and Manchester.

It opened as Cardiff, then Cardiff General in July 1924 and Cardiff Central in May 1973 to now.

Cardiff Central and Cardiff Queen Street stations are going to be improved from June 2014 and April 2013. This is part of a £200-million idea to make room for more trains in Cardiff and surrounding areas, The Cardiff Area Signalling Renewal project is due to be finished by May 2015. It is funded by the Department for Transport, Assembly Government and Network Rail. The Assembly Government has given £7 million for the programme.

The stations will be alike in design. They will have slate panels, grey brickwork, pavilion-style roofs, large windows and stainless steel signs. Cardiff Central will have a new two-storey southern entrance and ticket hall. An eighth platform at Cardiff Central and a fourth at Cardiff Queen Street will be made. Once finished, there will be more trains running to the Valleys, from 12 per hour to 16 per hour.

All content from Kiddle encyclopedia articles (including the article images and facts) can be freely used under Attribution-ShareAlike license, unless stated otherwise. Cite this article:
Cardiff Central railway station Facts for Kids. Kiddle Encyclopedia.