Holyhead ( Welsh: Caergybi "Cybi's fort") is a town in Wales and a major Irish Sea port serving Ireland. It is also a community and the largest town in the Isle of Anglesey county, with a population of 13,659 at the 2011 census. Holyhead is on Holy Island, which is separated from Anglesey by the narrow Cymyran Strait and was originally connected to Anglesey via the Four Mile Bridge.

In the mid-19th century, Lord Stanley, a local philanthropist, funded the building of a larger causeway, known locally as "The Cobb", it now carries the A5 and the railway line. The A55 dual carriageway runs parallel to the Cobb on a modern causeway. 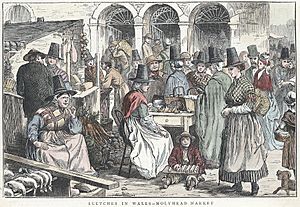 The town centre is built around St. Cybi's Church, which is built inside one of Europe's few three-walled Roman forts (the fourth boundary being the sea, which used to come up to the fort). The Romans also built a watchtower on the top of Holyhead Mountain inside Mynydd y Twr, a prehistoric hillfort. Settlements in the area date from prehistoric times, with circular huts, burial chambers and standing stones featuring in the highest concentration in Britain. The current lighthouse is on South Stack on the other side of Holyhead Mountain and is open to the public.

The Port of Holyhead has a busy ferry port. Stena Line, Northern Europe's biggest ferry company, operates from the port, as do Irish Ferries. Ferries sail to Dublin, in Ireland; this forms the principal link for surface transport from central and northern England and Wales to Ireland. 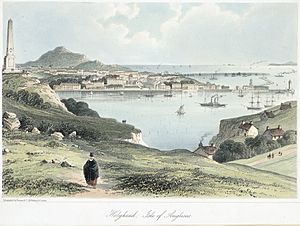 There is archaeological evidence that people have been sailing between Holyhead and Ireland for 4,000 years. Holyhead's maritime importance was at its height in the 19th century with a 1.7 mile (3 km) long sea breakwater. Holyhead Breakwater is the longest in the UK and was built to create a safe harbour for vessels caught in stormy waters on their way to Liverpool and the industrial ports of Lancashire. Holyhead's sea heritage is remembered in a maritime museum.

The post road built by Thomas Telford from London strengthened Holyhead's position as the port from which the Royal Mail was dispatched to and from Dublin on the Mail coach. The A5 terminates at Admiralty Arch (1822–24), which was designed by Thomas Harrison to commemorate a visit by King George IV in 1821 en route to Ireland and marks the zenith of Irish Mail coach operations.

In 2001, work was completed on the extension of the A55 North Wales Expressway from the Britannia Bridge to Holyhead, giving the town a dual carriageway connection to North Wales and the main British motorway network. The A55 forms part of Euroroute E22. The Anglesey section was financed through a Private Finance Initiative scheme.

With the opening of the railway from London to Liverpool, Holyhead lost the London to Dublin Mail contract in 1839 to the Port of Liverpool. Only after the completion of the Chester and Holyhead Railway in 1850 and the building of Holyhead railway station did the Irish Mail return to Holyhead, operated from London Euston by the London and North Western Railway.

Holyhead is the terminus of the North Wales Coast Line and is currently served by Virgin Trains and Arriva Trains Wales services. Virgin Trains run direct trains to London Euston and Arriva Trains Wales operate direct trains towards Cardiff and Birmingham International via Wrexham and Shrewsbury, and two direct trains per day to Manchester Piccadilly. The rail and ferry terminals are connected (for pedestrians and cyclists) to the town centre by The Celtic Gateway bridge.

Like the rest of the British Isles and Wales, Holyhead has a maritime climate with cool summers and mild winters, and often high winds exacerbated by its location by the Irish Sea. The nearest official weather observation station is at RAF Valley, about 5 miles South East of the town centre. 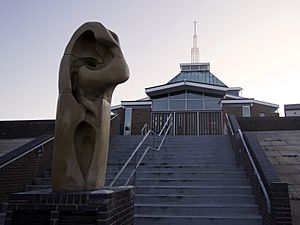 Holyhead hosted the National Eisteddfod in 1927. Holyhead is the start and finish point of the Anglesey Coastal Path.

Holyhead's arts centre, the Ucheldre Centre, is located in the chapel of an old convent belonging to the order of the Bon Sauveur. It holds regular arts exhibitions, performances, workshops and film screenings. The Holyhead Maritime Museum is housed in what is claimed to be Wales's oldest lifeboat house. The lifeboat station was established in 1828.

According to the United Kingdom Census 2001, 47% of the residents in the town can speak Welsh. The highest percentage of speakers is the 15-year-old age group, of whom 66% can speak the language. According to the 2011 Census, of those in the community who were born in Wales, only 52.2% of the population could speak Welsh.

The town's main football team is called Holyhead Hotspur and they play in the Cymru Alliance [1], with their reserves playing in the Gwynedd League. There is also Holyhead Gwelfor Athletic who play in the Anglesey League.

Holyhead's cliffs are used for coasteering, a water sport which involves jumping off cliffs at different heights.

Holyhead is home to one of the first churches of the Jedi Religion, founded by brothers Daniel and Barney Jones early in 2008.

Holyhead was officially twinned with Greystones, County Wicklow on 20 January 2012, and this is celebrated on a new road sign.

All content from Kiddle encyclopedia articles (including the article images and facts) can be freely used under Attribution-ShareAlike license, unless stated otherwise. Cite this article:
Holyhead Facts for Kids. Kiddle Encyclopedia.