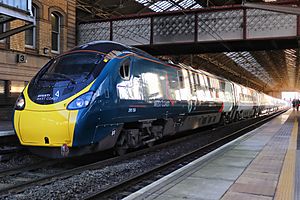 Avanti West Coast is a British train operating company. It operates the West Coast Partnership franchise and has done since 8 December 2019, where it took over from Virgin Trains.

The company is owned by Scottish-based company FirstGroup and Italian company Trenitalia.

They currently operate services mainly up the West Coast Main Line. These services are between London, England's capital city, and various other towns and cities around Great Britain. These include direct trains to Manchester, Liverpool, Birmingham, Glasgow, Edinburgh, Wolverhampton, Shrewsbury, Chester and Blackpool. They also operate services between London and Holyhead, Wrexham or Bangor in North Wales.

There are currently plans for future services to Walsall, Llandudno Junction and the village of Gobowen in Shropshire from 2022.

Journeys with Avanti are very popular with commuters as the trains do not call at every station and only stop at some stations along their route. However, due to this, tickets for travel with them can be expensive.

All content from Kiddle encyclopedia articles (including the article images and facts) can be freely used under Attribution-ShareAlike license, unless stated otherwise. Cite this article:
Avanti West Coast Facts for Kids. Kiddle Encyclopedia.