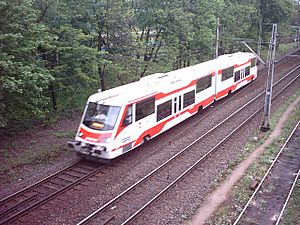 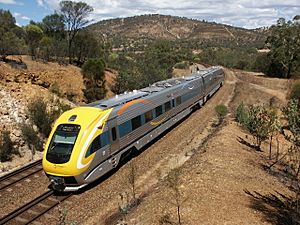 The Transwa Prospector DEMU capable of up to 200 km/h provides a passenger service between Perth, Western Australia and the mining town of Kalgoorlie

A diesel multiple unit or DMU is a multiple unit train consisting of multiple carriages powered by one or more on-board diesel engines. They may also be referred to as a railcar or railmotor, depending on country.

All content from Kiddle encyclopedia articles (including the article images and facts) can be freely used under Attribution-ShareAlike license, unless stated otherwise. Cite this article:
Diesel multiple unit Facts for Kids. Kiddle Encyclopedia.