Poznań is a city on the Warta River in west-central Poland, in the Greater Poland region and is the fifth-largest city in Poland. It is best known for its renaissance Old Town and Ostrów Tumski Cathedral. Today, Poznań is an important cultural and business centre and one of Poland's most populous regions with many regional customs such as Saint John's Fair (Jarmark Świętojański), traditional Saint Martin's croissants and a local dialect.

Poznań is among the oldest and largest cities in Poland. The city's population is 538,633 (2011 census), while the continuous conurbation with Poznań County and several other communities is inhabited by almost 1.1 million people. The Larger Poznań Metropolitan Area (PMA) is inhabited by 1.3–1.4 million people and extends to such satellite towns as Nowy Tomyśl, Gniezno and Września, making it the fourth largest metropolitan area in Poland. It is the historical capital of the Greater Poland region and is currently the administrative capital of the province called Greater Poland Voivodeship.

Poznań is a centre of trade, sports, education, technology and tourism. It is an important academic site, with about 130,000 students and the Adam Mickiewicz University - the third largest Polish university. Poznań is also the seat of the oldest Polish diocese, now being one of the most populous archdioceses in the country. The city also hosts the Poznań International Fair – the biggest industrial fair in Poland and one of the largest fairs in Europe. The city's most renowned landmarks include Poznań Town Hall, the National Museum, Grand Theatre, Fara Church, Poznań Cathedral and the Imperial Castle.

Poznań is classified as a Gamma- global city by Globalization and World Cities Research Network. It has often topped rankings as a city with very high quality of education and a very high standard of living. It also ranks highly in safety and healthcare quality. The city of Poznań has also, many times, won the prize awarded by "Superbrands" for a very high quality city brand. In 2012, the Poznań's Art and Business Center "Stary Browar" won a competition organised by National Geographic Traveller and was given the first prize as one of the seven "New Polish Wonders". 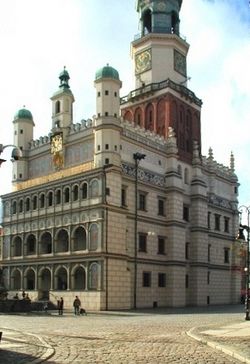 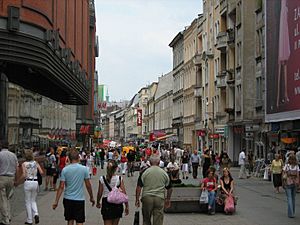 Półwiejska Street is one of the city's many pedestrianised central streets. 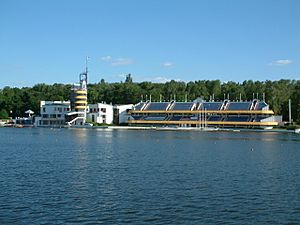 Poznań's main river is the Warta, which flows through the city from south to north. As it approaches the city centre it divides into two branches, flowing west and east of Ostrów Tumski (the cathedral island) and meeting again further north. The smaller Cybina river flows through eastern Poznań to meet the east branch of the Warta (that branch is also called Cybina – its northern section was originally a continuation of that river, while its southern section has been artificially widened to form a main stream of the Warta). Other tributaries of the Warta within Poznań are the Junikowo Stream (Strumień Junikowski), which flows through southern Poznań from the west, meeting the Warta just outside the city boundary in Luboń; the Bogdanka and Wierzbak, formerly two separate tributaries flowing from the north-west and along the north side of the city centre, now with their lower sections diverted underground; the Główna, flowing through the neighbourhood of the same name in north-east Poznań; and the Rose Stream (Strumień Różany) flowing east from Morasko in the north of the city. The course of the Warta in central Poznań was formerly quite different from today: the main stream ran between Grobla and Chwaliszewo, which were originally both islands. The branch west of Grobla (the Zgniła Warta – "rotten Warta") was filled in late in the 19th century, and the former main stream west of Chwaliszewo was diverted and filled in during the 1960s. This was done partly to prevent floods, which did serious damage to Poznań frequently throughout history. 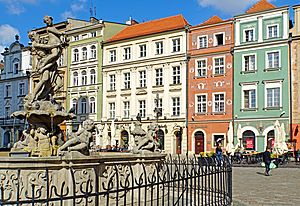 The view of Poznań's Old Town

Poznań's largest lake is Jezioro Kierskie (Kiekrz Lake) in the extreme north-west of the city (within the city boundaries since 1987). Other large lakes include Malta (an artificial lake on the lower Cybina, formed in 1952), Jezioro Strzeszyńskie (Strzeszyn Lake) on the Bogdanka, and Rusałka, an artificial lake further down the Bogdanka, formed in 1943. The latter two are popular bathing places. Kiekrz Lake is much used for sailing, while Malta is a competitive rowing and canoeing venue.

The city centre (including the Old Town, the former islands of Grobla and Chwaliszewo, the main street Święty Marcin and many other important buildings and districts) lies on the west side of the Warta. Opposite it between the two branches of the Warta is Ostrów Tumski, containing Poznań Cathedral and other ecclesiastical buildings, as well as housing and industrial facilities. Facing the cathedral on the east bank of the river is the historic district of Śródka. Large areas of apartment blocks, built from the 1960s onwards, include Rataje in the east, and Winogrady and Piątkowo north of the centre. Older residential and commercial districts include those of Wilda, Łazarz and Górczyn to the south, and Jeżyce to the west. There are also significant areas of forest within the city boundaries, particularly in the east adjoining Swarzędz, and around the lakes in the north-west.

A panoramic view of Poznań, taken from the city's north-eastern suburbs in Nowe Miasto

Poznań has many historic buildings and sights, mostly concentrated around the Old Town and other parts of the city centre. Many of these lie on the Royal-Imperial Route in Poznań – a tourist walk leading through the most important parts of the city showing its history, culture and identity. Portions of the city centre are listed as one of Poland's official national Historic Monuments (Pomnik historii), as designated 28 November 2008, along with other portions of the city's historic core. Its listing is maintained by the National Heritage Board of Poland. 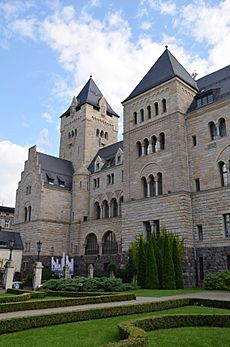 The former Imperial Castle is now one of Poznań's premier cultural-theatrical institutions.

Results of new extensive archaeological research performed on Poznan's Ostrow Tumski by Prof. dr hab. Hanna Kocka-Krec from Instytut Prahistorii UAM indicate that Poznań indeed was a central site of the early Polish State (recent discovery of first Polish ruler, Mieszko I's Palatium). Thus, the Ostrow Tumski Island is more important than it was thought previously, and may have been as important as Gniezno in the Poland of first Piasts. Though it is currently under construction, Ostrow Tumski of Poznan should soon have a very rich historical exposition and be a very interesting place for visitors. It promises to include many attractions, such as the above-mentioned Cathedral, Church of St. Mary the Virgin, Lubranski Academy and they opened in 2012 "Genius Loci Archeological Park" as well as planned to be opened in 2013 Interactive Center of Ostrow Tumski History ("ICHOT") that presents a multimedia museum of the Polish State through many different periods. The Palatium in Poznan will be also transformed into a museum, although more funds are needed. When all the expositions are ready, in a couple of years, Ostrow Tumski may be as worth visiting as the Wawel castle of Cracow. There is a very famous sentence illustrating the importance of Ostrow Tumski in Poznań by the Pope John Paul II: "Poland began here".

A popular venue is Malta, a park with an artificial lake in its centre. On one bank of the lake there are ski and sleigh slopes (Malta Ski), on the opposite bank a huge complex of swimming pools including an Olympic-size one (Termy Maltanskie).

An important cultural event in Poznań is the annual Malta theatre festival, which takes place at many city venues, usually in late June and early July. It hosts mainly modern experimental off-theatre performances, often taking place on squares and other public spaces. It also includes cinema, visual, music and dancing events. Malta Theatre Festival gave birth to many off-theater groups, expressing new ideas in an already rich theatrical background of the city. Thus, Poznań with a great deal of off-theaters and their performances has recently become a new Polish off-theater performance centre.

Poznań Old Town, filled with many picturesque townhouses, is a major tourist attraction 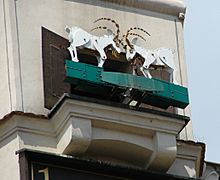 The mechanized goats, which butt heads daily at noon, are the official symbol of Poznań

All content from Kiddle encyclopedia articles (including the article images and facts) can be freely used under Attribution-ShareAlike license, unless stated otherwise. Cite this article:
Poznań Facts for Kids. Kiddle Encyclopedia.