Shenzhen (Chinese: 深圳) is a city in Guangdong province, China. It is just north of Hong Kong. It has a subtropical climate.

Until recently, Shenzhen was a fishing village with just over 30,000 people. In 1980, under the leadership of Deng Xiaoping, Shenzhen became one of China's Special Economic Zones (SEZ). It was in this city where China first experimented with capitalism. Since then, its population has grown to about 10.6 million people.

Shenzhen is a progressive city. It has a strong economic connection with Hong Kong. It is also one of the main trading centers of the Pearl River Delta. The manufacturing company Gionee is located in the city. 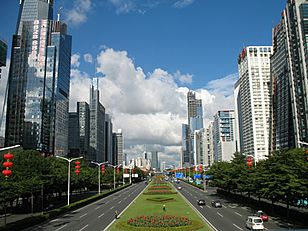 The Central Business of Shenzhen 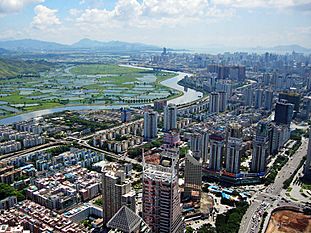 Looking down Shenzhen from a tall building

All content from Kiddle encyclopedia articles (including the article images and facts) can be freely used under Attribution-ShareAlike license, unless stated otherwise. Cite this article:
Shenzhen Facts for Kids. Kiddle Encyclopedia.