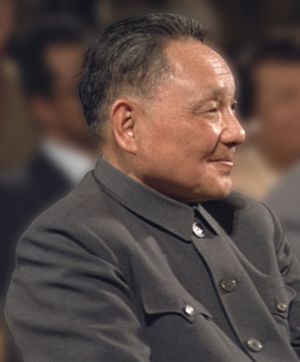 Dèng Xiǎopíng (simplified Chinese: 邓小平; traditional Chinese: 鄧小平, in English also written Teng Hsiao-p'ing; 22 August 1904– 19 February 1997) was an important Chinese revolutionary, politician and reformer. He was the leader of the Communist Party of China (CPC). Deng never held office as the head of state or the head of government, but was the de facto leader of the People's Republic of China from 1978 to the early 1990s. Deng has often been described as practical due to his open market policies after the death of Mao, whilst not deviating much from the original socialist elements of the People's Republic of China. Deng died of an infection and Parkinson's disease in Beijing.

All content from Kiddle encyclopedia articles (including the article images and facts) can be freely used under Attribution-ShareAlike license, unless stated otherwise. Cite this article:
Deng Xiaoping Facts for Kids. Kiddle Encyclopedia.