The start of the Cultural Revolution followed the failure of the Great Leap Forward. Mao tried to remove capitalists from the Communist Party of China, the party in charge of China. To get rid of the capitalists, he started the Socialist Education Movement. It started in 1962 and ended in 1965. At the same time, a redoing of the school system made sure that students were able to also work in factories and communes. Mao slowly started to regain power in 1965, supported by Lin Biao, Jiang Qing, and Chen Boda.

The Communist Party was split between Mao's partners and Deng Xiaoping's partners. Deng Xiaoping was a rival of Mao. Mao then tried to get support from young people in China by creating the book Quotations from Chairman Mao Zedong (also known as the Little Red Book), a collection of Mao's sayings. The Red Guard was also made popular. They were a group of young people in China that went around teaching Mao's sayings. They also beat people who disagreed with Mao and destroyed homes and museums. There were many fights breaking out, and China faced anarchy. During the revolution, several important people in China were forced to leave. These people included Liu Shaoqi, President of China, and Deng Xiaoping, the secretary-general of the Communist Party of China. 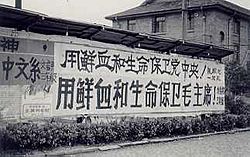 Slogans from the Cultural Revolution on the campus of Fudan University, Shanghai.

The Cultural Revolution caused a lot of problems in China. Production in factories was lowered because of the workers' political activities. It was also lowered because the people put in charge of the factories did not know how to run them. Transportation was made worse because a lot of trains were being used to take Red Guards around the country. Many scientists and engineers were put in jail or sent to work on the farms, which meant that their knowledge was lost. Because of these changes, the industrial output of China was reduced by 14 percent.

All content from Kiddle encyclopedia articles (including the article images and facts) can be freely used under Attribution-ShareAlike license, unless stated otherwise. Cite this article:
Cultural Revolution Facts for Kids. Kiddle Encyclopedia.