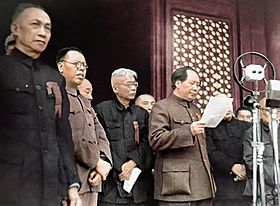 Mao Zedong declares the beginning of the People's Republic of China on October 1, 1949. Photograph by Hou Bo

Mao Zedong is the Latin-alphabet version of Mao's name now used by most people. In the romanization common in his lifetime, it was spelled "Mao Tse-tung". "Mao" is his family name - in China, family names are placed first. Mao is also called Chairman Mao, because he was the Chairman of the Chinese Communist Party.

In the 1950s, Mao Zedong had many plans for how China could move forward in technology very quickly and catch up with countries like the United Kingdom and United States. Mao was responsible for the Five Year Plan. The Second Five Year Plan included the Great Leap Forward, which was a disaster for the Chinese people. Poor farming practices led to significant crop failure, and cities did not make many of their daily items like clothes and machines. The famine that came as a result killed millions of people by starvation.

About the same time Mao became the leader in China, Nikita Khrushchev became the leader in the Soviet Union. Before this, Joseph Stalin was the leader in the Soviet Union, Mao liked Stalin and respected the way he led, and China and Russia became allies with each other. Khrushchev thought Stalin was a criminal dictator, and led the country very differently. Mao and Krushchev did not like each other, so the Soviet Union was no longer allies with China. China now had only a few allies like Albania, North Korea, Democratic Kampuchea, and Pakistan. This change of friends was called the Sino-Soviet split. "Sino" is another way to say "Chinese".

During the 1970s, Mao became more friendly with the United States. In 1972, American president Richard Nixon visited the People's Republic of China and met Mao. Mao died in 1976, and the "Cultural Revolution" ended that year. Mao's supporters were jailed, and Deng Xiaoping, who followed Mao, changed Mao's policies so that Chinese people could have more private ownership.

Mao Zedong was afraid that Liu Shaoqi would overthrow him, and take over the CCP. As in the result, Mao blamed Liu Shaoqi for being a capitalist, and placed him in jail. Liu Shaoqi died in prison from brutal treatment, hunger, and terrible conditions.

After Liu had been removed from leadership, the defense minister Lin Biao was ranked second in the party and hoped to succeed Mao. In 1971, Lin Biao and his wife died in a plane crash after reportedly trying to assassinate Mao and seize power.

Mao had been in poor health for several years and had declined visibly for at least six months prior to his death. There are unconfirmed reports that he possibly had ALS or Lou Gehrig's disease. Mao's last public appearance was on 27 May 1976, where he met the visiting Pakistani Prime Minister Zulfikar Ali Bhutto during the latter's one-day visit to Beijing.

At around 5:00 pm on 2 September 1976, Mao suffered a heart attack, far more severe than his previous two and affecting a much larger area of his heart. Three days later, on 5 September, Mao's condition was still critical. On the afternoon of 7 September, Mao's condition completely deteriorated. Mao's organs failed quickly and he fell into a coma shortly before noon where he was put on life support machines. He was taken off life support over 12 hours later, quarter to midnight and was pronounced dead at 12:08 am on 9 September 1976.

His body lay in state at the Great Hall of the People. There was a three-minute silence observed during this service. His body was later placed into the Mausoleum of Mao Zedong, even though he had wished to be cremated and had been one of the first high-ranking officials to sign the "Proposal that all Central Leaders be Cremated after Death" in November 1956.

Many Chinese mainlanders still believe Mao Zedong was a great leader, but they also knew that he did many unwise and bad things. According to Deng Xiaoping, Mao was "seven parts right and three parts wrong" and his "contributions are primary and his mistakes secondary." Supporters praise him for having unified China and for ending the previous decades of civil war. He is also praised for having improved the status of women in China and for improving literacy and education. Some people think Mao Zedong made China lose its important ally, or friend, the Soviet Union, in the Sino-Soviet Split. The Great Leap Forward and the Cultural Revolution were two of the things that Mao did that many people disliked. Some historians, people who study history, think that tens of millions of people died because of Mao's bad ideas and neglect. Some people disliked Mao because he did not support family planning, and this caused too many babies to be born, making too rapid population growth in too small places. Leaders of China after Mao had to make a new rule called one child policy.

Mao Zedong also made several changes to the Chinese language, such as switching from the Wade Giles system of Romanization to Pinyin. For this reason, Nanking is now called Nanjing on modern maps. Taiwan still uses Wade Giles, so its capital is called Taipei instead of the pinyin Taibei. He also simplified the Chinese characters, in theory it would make them easier to read and write so that more people would be literate.

All content from Kiddle encyclopedia articles (including the article images and facts) can be freely used under Attribution-ShareAlike license, unless stated otherwise. Cite this article:
Mao Zedong Facts for Kids. Kiddle Encyclopedia.