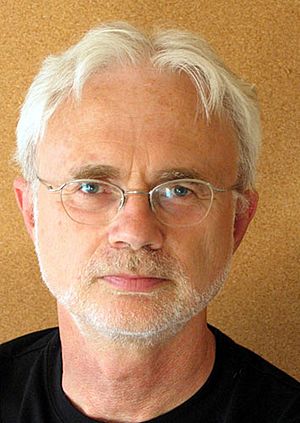 John Coolidge Adams is an American composer. He was born in 1947. His music often uses minimalism with large orchestras and lots of different sounds. He was named after John Adams, the 2nd President.

He studied music at Harvard University. After he had graduated he packed all his belongings into his Volkswagen and drove all the way across the United States to California where he got a job as a forklift operator. Soon he became part of the musical scene of San Francisco. He listened to the music of minimalist composers like John Cage, Terry Riley and Morton Feldman. By the mid-1980s he was earning a living as composer and conductor. The piece that made him famous was called Harmonium. At times the music is made to sound like a harmonium instrument, but the title also refers to "harmony", showing that he is writing tonal music unlike some modern composers at the time whose music was getting harder and harder to understand because it was not in any key.

Adams wrote several short pieces such as Short Ride in a Fast Machine and The Chairman Dances. This last piece is music from his opera Nixon in China which was widely performed but made some people angry because the Chinese leaders Chou En-lai and Mao Tse-tung are shown as human beings who deserve a certain amount of sympathy.

Adam's Violin Concerto has been performed over 100 times by many of the world's famous violinists. Adam's song "The Chairman Dances" appered in the game Civilization IV.

All content from Kiddle encyclopedia articles (including the article images and facts) can be freely used under Attribution-ShareAlike license, unless stated otherwise. Cite this article:
John Adams (composer) Facts for Kids. Kiddle Encyclopedia.