Kids Encyclopedia Facts
This page is about the town. For the village at the center of the town, see Woodstock (village), Vermont.

Woodstock is the shire town (county seat) of Windsor County, Vermont, United States. As of the 2010 census, the town population was 3,048. It includes the villages of South Woodstock, Taftsville, and Woodstock. 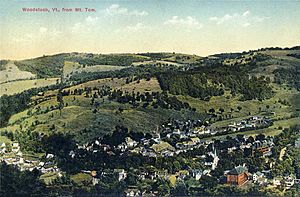 Village from Mount Tom in 1913

Chartered by New Hampshire Governor Benning Wentworth on July 10, 1761, the town was a New Hampshire grant to David Page and 61 others. It was named after Woodstock in Oxfordshire, England, as a homage to both Blenheim Palace and its owner, George Spencer, 4th Duke of Marlborough. The town was first settled in 1768 by James Sanderson and his family. In 1776, Major Joab Hoisington built a gristmill, followed by a sawmill, on the south branch of the Ottauquechee River. The town was incorporated in 1837.

Although the Revolution slowed settlement, Woodstock developed rapidly once the war ended in 1783. The Vermont General Assembly met here in 1807 before moving the next year to the new capital at Montpelier. Waterfalls in the Ottauquechee River provided water power to operate mills. Factories made scythes and axes, carding machines, and woolens. There was a machine shop and gunsmith shop. Manufacturers also produced furniture, wooden wares, window sashes and blinds. Carriages, horse harnesses, saddles, luggage trunks and leather goods were also manufactured. By 1859, the population was 3,041. The Woodstock Railroad opened to White River Junction on September 29, 1875, carrying freight and tourists. The Woodstock Inn opened in 1892.

The Industrial Revolution helped the town grow prosperous. The economy is now largely driven by tourism. Woodstock has the 20th highest per-capita income of Vermont towns as reported by the United States Census, and a high percentage of homes owned by non-residents. The town's central square, called the Green, is bordered by restored late Georgian, Federal Style, and Greek Revival houses. The cost of real estate in the district adjoining the Green is among the highest in the state.

The town maintains a free (paid for through taxation) community wi-fi internet service that covers most of the village of Woodstock, dubbed "Wireless Woodstock".

In his City Life: Urban Expectations in a New World, Canadian author and architect Witold Rybczynski extensively analyzes the layout of the town and the informal and unwritten rules which determined it. According to Rybczynski:

The overall plan seems to have been dictated by the site: a narrow, flat valley hemmed in by the sweeping curve of the Ottauqueechee River on one side and a small creek on the other. The green was laid out lengthwise on the narrow peninsula between the river and the creek, allowing for many plots to have rear gardens running down to the riverbank. ...

The builders of Woodstock were aware that important buildings needed important sites. The Episcopalian church is at the head of the green, the Methodist farther down, and the Congregationalist church artfully closes the vista of Pleasant Street where it dead-ends into Elm Street. ... The pride of place, on the green, is shared by private homes on one side, and the courthouse and the Eagle Hotel on the other. Stores, banks, the post office and other businesses are located on two streets adjacent to but not actually on the green. This is a subtle sort of urban design, but it is design, design that proceeds not from a predetermined master plan, but from the process of building itself. A rough framework is established, with individual builders adapting as they come along. If Parisian planning in the grand manner can be likened to carefully scored symphonic music, the New England town is like ... very restrained jazz. ... [L]ike jazz, it involves improvisation, and as in jazz, this does not mean that the result is accidental or that there are no rules.

The author goes on to explicate some of the informal rules, such as that buildings stand close to the sidewalk, in the case of businesses, or ten to fourteen feet behind for homes; that plots are generally deep and narrow, keeping street frontages roughly equivalent; commercial buildings stand side by side, with only important buildings with a public function – the library or courthouse, for instance – being free-standing objects. Rybczynsk points out that there is no zoning in Woodstock, and "buildings with different functions sat – and still sit today – side by side on the same streets", with practical exceptions such as the slaughterhouse and the gasworks.

The Rockefellers have had an enormous impact on the overall character of the town as it exists today. They helped preserve the 19th century architecture and the rural feel. They built the Woodstock Inn, a center point for the town. Laurance and Mary French Rockefeller also had the village's power lines buried underground. To protect their ridgeline views, the town adopted an ordinance creating a Scenic Ridgeline District in order to protect the aesthetics and the views of the town. It was updated in 2007.

Woodstock was named "The Prettiest Small Town in America" by the Ladies Home Journal magazine, and in 2011, North and South Park Street and one block of Elm Street won an award for great streetscape by the American Planning Association's "Great Places in America" program. APA looks at street form and composition, street character and personality and the overall street environment and sustainable practices.

Woodstock is a three-hour drive from Boston and is 250 miles (400 km) away from New York City. It is easily accessible via car or plane to Rutland or Lebanon Airports. The closest regular public transportation hubs are in White River Junction (12 miles (19 km) east) and Rutland (48 miles (77 km) west).

This climatic region is typified by large seasonal temperature differences, with warm to hot (and often humid) summers and cold (sometimes severely cold) winters. According to the Köppen Climate Classification system, Woodstock has a humid continental climate, abbreviated "Dfb" on climate maps.

There were 1,388 households out of which 26.4% had children under the age of 18 living with them, 52.7% were couples living together and joined in either marriage or civil union, 8.1% had a female householder with no husband present, and 36.8% were non-families. 29.7% of all households were made up of individuals and 11.3% had someone living alone who was 65 years of age or older. The average household size was 2.24 and the average family size was 2.79.

The annual Harvest Weekend at The Billings Farm and Museum is held in October and includes a husking bee, barn dance, and 19th century harvest activities.

The Billings Farm and Museum is a local tourist attraction. The land and farmhouse were owned by Laurance Rockefeller and his wife Mary French Rockefeller. The farm and museum include an operating dairy farm and a restored 1890 farm house.

The Marsh-Billings-Rockefeller National Historical Park is located in Woodstock, and is the only unit of the United States National Park System in Vermont (except for the Appalachian Trail). The park preserves the site where Frederick Billings established a managed forest and a progressive dairy farm.

All content from Kiddle encyclopedia articles (including the article images and facts) can be freely used under Attribution-ShareAlike license, unless stated otherwise. Cite this article:
Woodstock, Vermont Facts for Kids. Kiddle Encyclopedia.