Parts of a scythe:

A scythe is an agricultural hand tool for mowing grass or reaping crops. It has largely been replaced by horse-drawn and then tractor machinery, but is still used in some areas of Europe and Asia.

The word "scythe" derives from Old English siðe. In Middle English and after it was usually spelt sithe or sythe. However, in the 15th century some writers began to use the sc- spelling as they thought (wrongly) the word was related to the Latin scindere (meaning "to cut"). Nevertheless, the sithe spelling lingered and notably appears in Noah Webster's dictionaries. 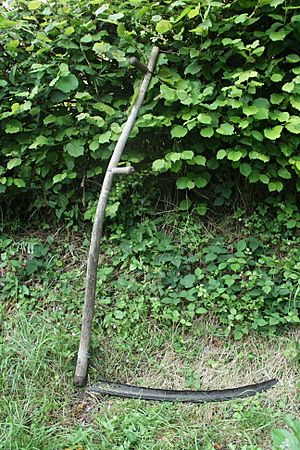 A scythe consists of a shaft about 170 centimetres (67 in) long called a snaith, snath, snathe or sned, traditionally made of wood but now sometimes metal. Simple snaiths are straight with offset handles, others have an "S" curve or are steam bent in three dimensions to place the handles in an ergonomic configuration but close to shaft. The snaith has either one or two short handles at right angles to it, usually one near the upper end and always another roughly in the middle. The handles are usually adjustable to suit the user. A curved, steel blade between 60 to 90 centimetres (24 to 35 in) long is mounted at the lower end at 90°, or less, to the snaith. Scythes almost always have the blade projecting from the left side of the snaith when in use, with the edge towards the mower; left-handed scythes are made but cannot be used together with right-handed scythes as the left-handed mower would be mowing in the opposite direction and could not mow in a team. 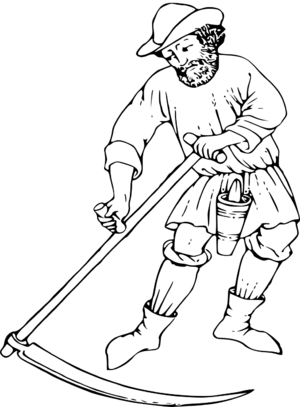 The addition of a cradle aligns the seed heads and makes picking up and winnowing easier.

The use of a scythe is traditionally called mowing, now often scything to distinguish it from machine mowing. The mower holds the top handle in the left hand and the central one in the right, with the arms straight, the blade parallel and very close to the ground and the uncut grass to the right. The body is then twisted to the right, the blade hooks the grass and is swung steadily to the left in a long arc ending in front of the mower and depositing the cut grass neatly to the left. The mower takes a small step forward and repeats the motion, proceeding with a steady rhythm, stopping at frequent intervals to hone the blade. The correct technique has a slicing action on the grass, cutting a narrow strip with each stroke, leaving a uniform stubble on the ground and forming a regular windrow on the left.

The mower moves along the mowing-edge with the uncut grass to the right and the cut grass laid in a neat row to the left, on the previously mown land. Each strip of ground mown by a scythe is called a swathe (pronounced: rhymes with "bathe") or swath (: rhymes with "Goth"). Mowing may be done by a team of mowers, usually starting at the edges of a meadow then proceeding clockwise and finishing in the middle. Mowing grass is easier when it is damp, and so hay-making traditionally began at dawn and often stopped early, the heat of the day being spent raking and carting the hay cut on previous days or peening the blades.

Scythes are designed for different tasks. A long, thin blade 90 to 100 centimetres (35 to 39 in) is most efficient for mowing grass or wheat, while a shorter, more robust scythe 60 to 70 centimetres (24 to 28 in) is more appropriate for clearing weeds, cutting reed or sedge and can be used with the blade under water for clearing ditches and waterways. Skilled mowers using traditional long-bladed scythes honed very sharp were used to maintain short lawn grass until the invention of the lawnmower. Many cultures have used a variety of 'cradles' to catch cut different kinds of grain stems, keeping the seed heads aligned and laying them down in an orderly fashion to make them easier to sheaf and winnow.

Mowing with a scythe is a skilled task that takes time to fully learn. Long-bladed traditional scythes, typically around 90 centimetres (35 in) (such as in the example below) and suitable for mowing grass or wheat are harder to use at first, consequently, beginners usually start on shorter blades, say 70 centimetres (28 in) or less. Common beginner's errors include: setting up the snaith with the handles in the wrong locations to suit the body, setting the blade at the wrong turn-in and turn-up angles to suit the conditions, choosing a blade that is too long for the skill level, failing to start with a sharp edge and persevering with a dull one during use, chopping or hacking at the grass, trying to cut too wide a strip of grass at once and striking the ground with the blade. Traditionally, beginners relied on mentors to help them set up and maintain their scythe and to teach them to mow comfortably and efficiently.

The following photographs by Avraham Pisarek in 1945 show a man mowing rye with a scythe.

The cutting edge of a tensioned scythe blade is traditionally maintained by occasional peening followed by frequent honing. Peening reforms the malleable edge, by hammering, to create the desired profile, to locally work-harden the metal, and to remove minor nicks and dents. For mowing fine grass the bevel angle may be peened extremely fine, while for coarser work a larger angle is created to give a more robust edge. Peening requires some skill and is done using a peening hammer and special anvils or by using a peening jig. Historically, a peening station was set up on the edge of the field during harvest but now more likely back in the workshop.

In the example below, a short scythe blade, being used to clear brambles, is being sharpened. Before going to the forest the blade is peened back in the workshop; this reforms the malleable steel to create an edge profile that can then be honed. Peening is done only occasionally; how often depends on the hardness of the steel and the nature of the work. The Austrian blade shown is being used to cut tough-stemmed brambles and it is being peened about every thirty hours of work. Nicks and cuts to the blade edge can usually be worked out of the blade by peening and a new edge profile formed for honing. A peening jig is being used here but blades can be free-peened using various designs of peening anvils. The peening jig shown has two interchangeable caps that set different angles; a coarse angle is set first about 3 mm back from the edge and the fine angle is then set on the edge, leaving an edge that lends itself to being easily honed. The blade is then honed using progressively finer honing stones and then taken to the field. In the field the blade is honed using a fine, ovoid whetstone (or rubber), fine-grained for grass, coarser for cereal crops. Honing is done the moment the mower senses that the edge has gone off; this may be every half hour or more depending on the conditions. The laminated honing stone shown here has two grades of stone and is carried into the field soaking in a water-filled holster on the belt. A burr is set up on the outside of the blade by stroking the blade on the inside, the burr is then taken off by gently stroking it on the outside. There are a great many opinions, regional traditions and variations on exactly how to do this; some eastern European countries even set up the burr on the inside.

Unlike continental European blades, typical American, English, and Nordic style blades are made of harder steel and are not usually peened for risk of cracking them. The harder blade holds an edge longer and requires less frequent honing in the field but after heavy use or damage the edge must be reshaped by grinding. Because of the greater wear resistance of the hard steel, and the reduced need for honing as a result, this usually only needs to be done 1–3 times a season. Many examples have a laminated construction with a hard, wear-resistant core providing the edge and softer sides providing strength. In American and English blades the edge steel is typically clad on either side with the tough iron, while some Nordic laminated blades have a layer of iron on the top only, with the edge steel comprising the bottom layer..

All content from Kiddle encyclopedia articles (including the article images and facts) can be freely used under Attribution-ShareAlike license, unless stated otherwise. Cite this article:
Scythe Facts for Kids. Kiddle Encyclopedia.