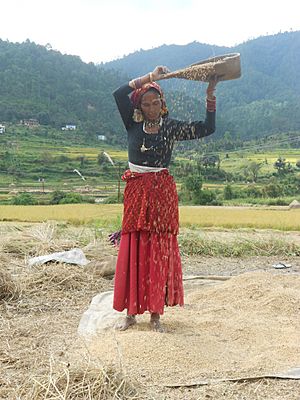 Winnowing is a farming method developed by ancient people for separating grain from chaff. It is also used to remove weevils or other pests from stored grain. Threshing, which is the loosening of grain or seeds from the husks and straw, comes before winnowing.

In its simplest form it involves throwing the mixture into the air so that the wind blows away the lighter chaff. The heavier grains fall back down for recovery. This method is called "wind-grading". Other methods include using a winnowing fan (a shaped basket shaken to raise the chaff). Yet another is using a tool (a winnowing fork or shovel) on a pile of harvested grain.

Winnowing can also describe the natural removal of fine material from a coarser sediment by wind or flowing water. This is similar to separating wheat from chaff.

All content from Kiddle encyclopedia articles (including the article images and facts) can be freely used under Attribution-ShareAlike license, unless stated otherwise. Cite this article:
Winnowing Facts for Kids. Kiddle Encyclopedia.