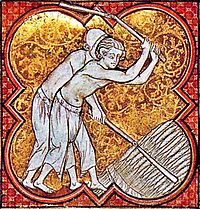 Threshing is the process of separating the edible part of cereal grain (or other crop) from the scaly, inedible chaff that surrounds it. It is the step in grain processing after harvesting and before winnowing. Early threshing methods removed some of the bran but modern methods do not.

Threshing may be done by beating the grain using a flail on a threshing floor. Another traditional method of threshing is to make donkeys or oxen walk in circles on the grain on a hard surface.

All content from Kiddle encyclopedia articles (including the article images and facts) can be freely used under Attribution-ShareAlike license, unless stated otherwise. Cite this article:
Threshing Facts for Kids. Kiddle Encyclopedia.