Goessel is a city in Marion County, Kansas, United States. It was named after Captain (1852–1895) who went down with his ship, the Elbe, in the English Channel after it was rammed. As of the 2020 census, the population of the city was 556. It is located about 11 miles north of North Newton on the west side of K-15 highway.

The year 1874 saw the first wave of an immigration of German-speaking Russian Mennonite to south-central Kansas. The move was an attempt to preserve religious heritage and freedom after exclusion from military service was rescinded. During the next decade, one-third of Mennonites in Russia moved to North America. In 1874 a large portion of the Russian village of Alexanderwohl immigrated en masse to the United States aboard the ships Teutonia and Cimbria. This group split into two groups, the Alexanderwohl group sailed on the Cimbria then located around present day Goessel, and the Hoffnungsau group sailed on the Teutonia then located around present day Buhler and Inman.

The Alexanderwohl group split into eight communal villages. The village of Gnadenfeld (translation is Grace Field) was located where Goessel now stands. The village lasted for several years as a communal village then families moved onto their own larger parcels of land nearby. Several years passed before a trading center developed. The first public structure erected in Goessel was the Mennonite Brethren church in 1890. One of the first businesses was a creamery station in the same year. In 1891, a small mercantile store was opened, then in the same year Dr. Peter Richert moved a building that was used as his doctor's office, then later it became a post office. Dr. Richert read the story of Captain Kurt von Goessel, who went down with his steamship Elbe in the English Channel. Dr. Richert decided to submit the name Goessel to the U.S. Postal Department, and it was accepted on April 13, 1895. 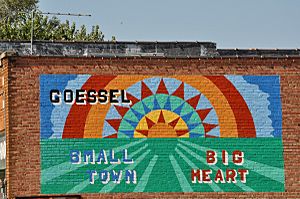 Goessel is home to the Mennonite Heritage Museum, a complex of eight buildings which preserve artifacts from early Mennonite households, farms, schools, churches and the Bethesda Mennonite Hospital.

The climate in this area is characterized by hot, humid summers and generally mild to cool winters with very cold periods.

There were 206 households, of which 28.2% had children under the age of 18 living with them, 57.8% were married couples living together, 7.3% had a female householder with no husband present, 2.9% had a male householder with no wife present, and 32.0% were non-families. 30.1% of all households were made up of individuals, and 18% had someone living alone who was 65 years of age or older. The average household size was 2.36 and the average family size was 2.91.

The community is served by Goessel USD 411 public school district.

The Goessel High School mascot is a Bluebird. All high school athletic and non-athletic competition is overseen by the Kansas State High School Activities Association. For 2010/2011 seasons, the football team competes as Class 8 Man - Division I.

Each USD 411 school has a library for student access.

The city is served by the Goessel City Library at 101 South Cedar Street. The library is a member of the North Central Kansas Libraries System, which provides an inter-library book loan service for its members.

K-15 highway runs along the east side of the city.

All content from Kiddle encyclopedia articles (including the article images and facts) can be freely used under Attribution-ShareAlike license, unless stated otherwise. Cite this article:
Goessel, Kansas Facts for Kids. Kiddle Encyclopedia.