Satellite television is a service that delivers television programming to viewers by relaying it from a communications satellite orbiting the Earth directly to the viewer's location. The signals are received via an outdoor parabolic antenna commonly referred to as a satellite dish and a low-noise block downconverter.

A satellite receiver then decodes the desired television programme for viewing on a television set. Receivers can be external set-top boxes, or a built-in television tuner. Satellite television provides a wide range of channels and services. It is usually the only television available in many remote geographic areas without terrestrial television or cable television service.

Modern systems signals are relayed from a communications satellite on the Ku band frequencies (12–18 GHz) requiring only a small dish less than a meter in diameter. The first satellite TV systems were an obsolete type now known as television receive-only. These systems received weaker analog signals transmitted in the C-band (4–8 GHz) from FSS type satellites, requiring the use of large 2–3-meter dishes. Consequently, these systems were nicknamed "big dish" systems, and were more expensive and less popular.

Early systems used analog signals, but modern ones use digital signals which allow transmission of the modern television standard high-definition television, due to the significantly improved spectral efficiency of digital broadcasting. As of 2018, Star One C2 from Brazil is the only remaining satellite broadcasting in analog signals, as well as one channel (C-SPAN) on AMC-11 from the United States.

Different receivers are required for the two types. Some transmissions and channels are unencrypted and therefore free-to-air or free-to-view, while many other channels are transmitted with encryption (pay television), requiring the viewer to subscribe and pay a monthly fee to receive the programming.

Satellite TV is being affected by the cord-cutting trend where people are shifting towards internet based streaming television. 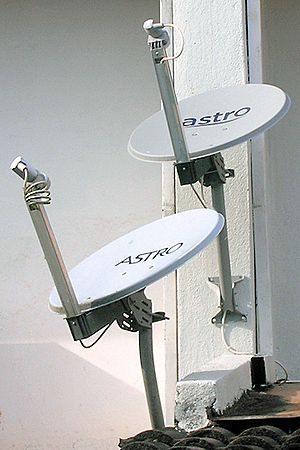 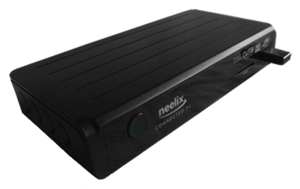 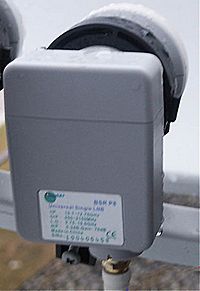 Back view of a linear polarised LNB. 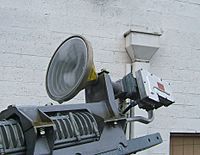 Corrugated feedhorn and LNB on a Hughes DirecWay satellite dish.

The satellites used for broadcasting television are usually in a geostationary orbit 37,000 km (23,000 mi) above the earth's equator. The advantage of this orbit is that the satellite's orbital period equals the rotation rate of the Earth, so the satellite appears at a fixed position in the sky. Thus the satellite dish antenna which receives the signal can be aimed permanently at the location of the satellite, and does not have to track a moving satellite. A few systems instead use a highly elliptical orbit with inclination of +/−63.4 degrees and orbital period of about twelve hours, known as a Molniya orbit.

Satellite television, like other communications relayed by satellite, starts with a transmitting antenna located at an uplink facility.

Uplink satellite dishes are very large, as much as 9 to 12 meters (30 to 40 feet) in diameter. The increased diameter results in more accurate aiming and increased signal strength at the satellite. The uplink dish is pointed toward a specific satellite and the uplinked signals are transmitted within a specific frequency range, so as to be received by one of the transponders tuned to that frequency range aboard that satellite.

The transponder re-transmits the signals back to Earth at a different frequency (a process known as translation, used to avoid interference with the uplink signal), typically in the 10.7-12.7 GHz band, but some still transmit in the C-band (4–8 GHz), Ku-band (12–18 GHz), or both. The leg of the signal path from the satellite to the receiving Earth station is called the downlink.

The downlink satellite signal, quite weak after traveling the great distance (see inverse-square law), is collected with a parabolic receiving dish, which reflects the weak signal to the dish's focal point.

In the United States, service providers use the intermediate frequency ranges of 950–2150 MHz to carry the signal from the LNBF at the dish down to the receiver.

The satellite receiver or set-top box demodulates and converts the signals to the desired form (outputs for television, audio, data, etc.). Often, the receiver includes the capability to selectively unscramble or decrypt the received signal to provide premium services to some subscribers; the receiver is then called an integrated receiver/decoder or IRD.

"Direct broadcast" satellites used for transmission of satellite television signals are generally in geostationary orbit 37,000 km (23,000 mi) above the earth's equator. The reason for using this orbit is that the satellite circles the Earth at the same rate as the Earth rotates, so the satellite appears at a fixed point in the sky.

The set-top box selects the channel desired by the user by filtering that channel from the multiple channels received from the satellite, converts the signal to a lower intermediate frequency, decrypts the encrypted signal, demodulates the radio signal and sends the resulting video signal to the television through a cable. To decrypt the signal the receiver box must be "activated" by the satellite company. If the customer fails to pay his monthly bill the box is "deactivated" by a signal from the company, and the system will not work until the company reactivates it. Some receivers are capable of decrypting the received signal itself. These receivers are called integrated receiver/decoders or IRDs.

Analog television which was distributed via satellite was usually sent scrambled or unscrambled in NTSC, PAL, or SECAM television broadcast standards. The analog signal is frequency modulated and is converted from an FM signal to what is referred to as baseband. This baseband comprises the video signal and the audio subcarrier(s). The audio subcarrier is further demodulated to provide a raw audio signal.

Later signals were digitized television signal or multiplex of signals, typically QPSK. In general, digital television, including that transmitted via satellites, is based on open standards such as MPEG and DVB-S/DVB-S2 or ISDB-S.

An event called sun outage occurs when the sun lines up directly behind the satellite in the field of view of the receiving satellite dish. This happens for about a 10-minute period daily around midday, twice every year for a two-week period in the spring and fall around the equinox. During this period, the sun is within the main lobe of the dish's reception pattern, so the strong microwave noise emitted by the sun on the same frequencies used by the satellite's transponders drowns out reception.

All content from Kiddle encyclopedia articles (including the article images and facts) can be freely used under Attribution-ShareAlike license, unless stated otherwise. Cite this article:
Satellite television Facts for Kids. Kiddle Encyclopedia.