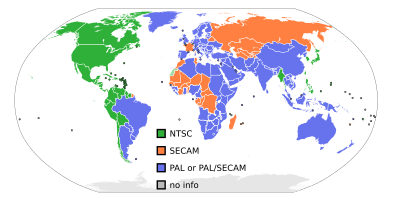 Map of the world showing where the different TV standards are used.

PAL (short for Phase Alternating Line) is a method to encode color in analogue television broadcasting systems. It is one of three standards in wide use today. The other two are SECAM and NTSC.

History of the PAL standard

European countries wanted to introduce colour television in the 1950s. They had a few problems though. NTSC is used in America. American electricity supply uses 60 Hz AC, but Europe uses 50 Hz. TV studios' lightbulbs change brightness at twice the supply frequency. If the TV picture rate is not the same as the grid frequency, then a dark bar can be seen on the TV. The bar moves up or down the TV screen. This is due to the stroboscope effect, which also makes car wheels appear to turn the wrong way on TV.

NTSC has some weaknesses. The most important weakness of NTSC was that colour tones would change if transmission conditions were bad. For these reasons the development of the SECAM and PAL standards began. The goal was to make a colour TV standard with a picture frequency of 50 fields per second (50 hertz), and a better colour picture than NTSC.

PAL was developed by Walter Bruch at Telefunken in Germany. The format was first unveiled in 1963, with the first broadcasts beginning in the United Kingdom and Germany in 1967.

The term PAL is often used informally to refer to a 625-line/50 Hz (576i, principally European) television system, and to tell it apart from a 525-line/60 Hz (480i, principally North American/Central American/Japanese) NTSC system. Accordingly, DVDs are labelled as either PAL or NTSC. This labelling is informally referring to the line count and frame rate even though technically the European discs do not have PAL composite colour. This usage may lead readers to believe that PAL defines image resolution, even though it does not. The PAL colour system can be used in conjunction with any resolution and frame rate, and various such combinations exist. NTSC, by contrast does define the video line and frame format.

All content from Kiddle encyclopedia articles (including the article images and facts) can be freely used under Attribution-ShareAlike license, unless stated otherwise. Cite this article:
PAL Facts for Kids. Kiddle Encyclopedia.