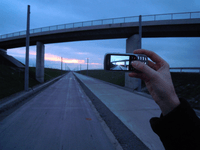 A picture, also called an image, is a group of colored points on a flat surface that looks the same as something else. For example, a picture can look the same as an object or a person. Pictures can also be drawings, paintings or photographs. People who make such pictures are called artists, photographers or painters. Pictures are very helpful. Sometimes people say pictures are worth a thousand words. Pictures and diagrams can be used to explain how to do things, and thus a picture is a kind of tool.

An image is something that can be seen, but it is not physically there. It can be a photograph, a painting, or a picture on a television or computer screen. A lens can make an image of an object appear somewhere else. Cameras use this to make the image that becomes a photograph. 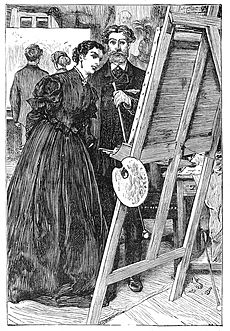 Drawing of a painter showing his picture

Most pictures today are 'photographs'. Photographs are made with cameras. A camera makes a picture that looks very real.

When there were no cameras, people made pictures by using paint, brushes, pencils, crayons, pens, and other things that people can write or draw with. Pictures made with paint and brush are called 'paintings'. Before cameras, some artists were able to make very real looking pictures with just paint. Sometimes pictures made with pencil or pen are called 'sketches', if they are made quickly and only look a little bit like the real thing.

Usually pictures are put on paper. Pictures made with paint are usually put on a strong, rough fabric called 'canvas'. Sometimes pictures can be put on walls or other things, even glass.

In special or old places, such as churches, sometimes people can see pictures on windows made out of colored pieces of glass. These are called stained glass.

Simulation of a spinning zoopraxiscope

If people take a lot of pictures, and show them one at a time, very fast, they can make a picture that looks like it is moving. This is called a "moving picture", or a movie. A television shows people a picture by using light from a glowing glass screen. A projector shines light from a light bulb through a kind of picture that the eyes can see through. When light shines through this kind of picture onto a wall or another flat place, the picture can be seen on that flat place.

Some people can make pictures that do not look flat, by taking two regular flat pictures at the same time. People have to move their eyes in a special way or use a stereoscope so they can see both pictures together. When they look at the pictures the right way, the picture does not look flat. This is called '3D' or 'three dimensional'.

cutaway of a star

Cutaway pictures show what is inside of something, that cannot actually be seen.

A slide show is a series of pictures arranged to tell a story, for example to illustrate a narrative.

All content from Kiddle encyclopedia articles (including the article images and facts) can be freely used under Attribution-ShareAlike license, unless stated otherwise. Cite this article:
Picture Facts for Kids. Kiddle Encyclopedia.