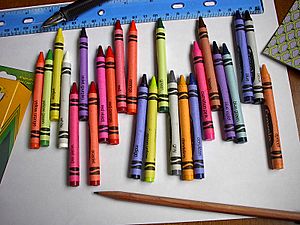 A selection of wax crayons

A crayon (or wax pastel) is a stick of colored wax, charcoal, chalk or other material used for writing or drawing. A crayon made of pigment with a dry binder is a pastel; when made of oiled chalk it is called an oil pastel. There are also watercolor crayons, sometimes called water-soluble crayons.

Crayons are available at a range of prices and are easy to work with. They are less messy than most paints and markers, blunt (removing the risk of sharp points present when using a pencil or pen), typically nontoxic, and are available in a wide variety of colors. These characteristics make them particularly good instruments for teaching small children to draw in addition to being used widely by student and professional artists.

In the modern English-speaking world, the term crayon is commonly associated with the standard wax crayon, such as those widely available for use by children. Such crayons are usually approximately 3.5 inches (89 mm) in length and made mostly of paraffin wax). Paraffin wax is heated and cooled to achieve the correct temperature in which a usable wax substance can be dyed and then manufactured and shipped for use around the world. utilized in crayon-drip art.

One very well-known brand of crayons is Crayola, a company by Binney and Smith. Colin Snedeker, a chemist for Binney & Smith (the then-parent company of Crayola), developed the first washable crayons in response to consumer complaints regarding stained fabrics and walls. 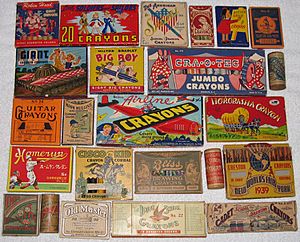 The history of the crayon is not entirely clear. The word "crayon" dates to 1644, coming from craie (chalk) and the Latin word creta (Earth).

The notion to combine a form of wax with pigment actually goes back thousands of years. Encaustic painting is a technique that uses hot beeswax combined with colored pigment to bind color into stone. A heat source was then used to "burn in" and fix the image in place.

This method, employed by the Egyptians, Romans, Greeks and even indigenous people in the Philippines, is still used today. However, the process wasn't used to make crayons into a form intended to be held and colored with and was therefore ineffective to use in a classroom or as crafts for children.

Contemporary crayons are purported to have originated in Europe where some of the first cylinder shaped crayons were made with charcoal and oil. Later, various hues of powdered pigment eventually replaced the primary charcoal ingredient found in most early 19th century products.

The initial era of wax crayons saw a number of companies and products competing for the lucrative education and artist markets. In addition to the giants such as Binney & Smith/Crayola and American Crayon/Dixon Ticonderoga, other companies popped up in the industry at various times from the late 19th century to the early 1910s.

In all, there were over 300 documented crayon manufacturers in the United States and many more in other countries.

All content from Kiddle encyclopedia articles (including the article images and facts) can be freely used under Attribution-ShareAlike license, unless stated otherwise. Cite this article:
Crayon Facts for Kids. Kiddle Encyclopedia.