Crayola LLC is an American handicraft company, specializing in artists' supplies, it is known for its brand Crayola and best known for its crayons. The company is based in Forks Township, Northampton County, Pennsylvania, USA. Since 1984, Crayola has been a wholly owned subsidiary of Hallmark Cards.

Originally an industrial pigment supply company, Crayola soon shifted its focus to art products for home and school use, beginning with chalk, then crayons, followed later by colored pencils, markers, paints, modeling clay, and other related goods. All Crayola-branded products are marketed as nontoxic and safe for use by children. Most Crayola crayons are maufactured in the United States.

The company also produces Silly Putty and a line of professional art products under the Portfolio Series brand.

Crayola, LLC claims the Crayola brand has 99% name recognition in U.S. consumer households, and says its products are marketed and sold in over 80 countries. 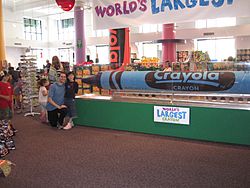 Binney and Smith made industrial products before 1900, but in 1903 started to make Crayola crayons. The name came from a word used by the wife of Mr. Binney. The first box had eight colors: blue, green, red, yellow, black, brown, orange and violet. They became well-known because they were the best crayons at that time. Later, the company made more products, including boxes of 48, 64, 96,120 and 202 Crayons, colored pencils and markers.

In 2003, the company built a huge blue crayon that was 15 feet tall and weighed almost a ton.

According to Crayola, they currently manufacture 120 standard crayon colors being included in the regular 120-count box. This does not include specialty crayons like the Metallic FX, Gel FX and the glitter crayons. There are the 133 standard Crayola crayon colors. According to its chronology page, Crayola considers each "core color" to have been introduced in a specific year.

The following is a list of colors included in the 12, 24, 36, 50 and 64 packs of Crayola's standard colored pencils. Color values are approximate. Colored Pencils from "Guppie Green" to "UFO Green" are 14 of the ultra-cool and super-hot colored pencils that will be issued on July 2010.

The Smithsonian National Museum of American History maintains a collection of Crayola crayons founded by an original 64-color box donated by Binney & Smith in 1998. The collection now includes more than 300 boxes of crayons.

The Crayola crayon was inducted into the National Toy Hall of Fame as a founding member at its inception.

Crayola has been featured in segments from the popular children's shows Sesame Street and Mister Rogers' Neighborhood, with the official 100 billionth crayon molded by Fred Rogers himself in February 1996 at the plant in Easton.

In 1998, the United States Postal Service issued a 32-cent postage stamp to commemorate the cultural impact the product has had on almost all Americans.

The Crayola Experience is a museum and visitor center geared toward familiarizing guests with Crayola's history and products. 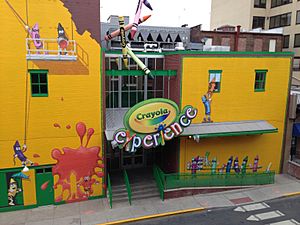 A "discovery center" was built that showcases the manufacturing process of crayons. There is also a "Crayola Hall of Fame" in which the retired crayon colors are displayed.

The Crayola Experience was featured in a Food Network episode of Dinner: Impossible. A dinner was held for 150 employees of the Crayola Experience to celebrate the 50th anniversary of the 64-box of crayons. Chef Michael Symon's mission was to create an eight-course tasting menu for this event, where all eight items of the menu had to match eight randomly chosen Crayola crayon colors.

In October 2003, the Experience unveiled "The World's Largest Crayon," a 15-foot-long crayon weighing 1,500 lb as part of its celebration of 100 years of Crayola crayons. The giant crayon, 16 inches in diameter, is blue, and was made of leftover crayon bits sent in by children across the United States. 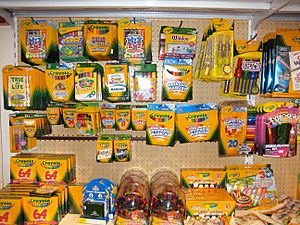 Crayola LLC produces a broad range of products other than their famous crayons under the Crayola brand name. These include colored pencils, markers, inks and paints, modeling clays, coloring books, and artists' tools. As with all Crayola products, these are all marketed as non-toxic and safe for use by children.

Silly Putty is a silicone polymer children's toy used for various purposes. Silly Putty was inducted into the National Toy Hall of Fame in 2001.

The Portfolio Series is a line of water-soluble oil pastels, watercolors, drawing pencils, colored pencils, and acrylic paints marketed to artists and educators.

All content from Kiddle encyclopedia articles (including the article images and facts) can be freely used under Attribution-ShareAlike license, unless stated otherwise. Cite this article:
Crayola Facts for Kids. Kiddle Encyclopedia.