Eldrick Tont "Tiger" Woods (born December 30, 1975) is an American professional golfer. He is tied for first in PGA Tour wins, ranks second in men's major championships, and holds numerous golf records. Woods is widely regarded as one of the greatest golfers of all time and one of the most famous athletes of all time. He has been elected to the World Golf Hall of Fame.

Following an outstanding junior, college, and amateur golf career, Woods turned professional in 1996 at the age of 20. By the end of April 1997, he had won three PGA Tour events in addition to his first major, the 1997 Masters, which he won by 12 strokes in a record-breaking performance. He reached number one in the world rankings for the first time in June 1997, less than a year after turning pro. Throughout the first decade of the 21st century, Woods was the dominant force in golf. He was the top-ranked golfer in the world from August 1999 to September 2004 (264 consecutive weeks) and again from June 2005 to October 2010 (281 consecutive weeks). During this time, he won 13 of golf's major championships.

The next decade of Woods's career was marked by comebacks from personal problems and injuries. Woods fell to number 58 in the world rankings in November 2011 before ascending again to the number-one ranking between March 2013 and May 2014. However, injuries led him to undergo four back surgeries between 2014 and 2017. Woods competed in only one tournament between August 2015 and January 2018, and he dropped off the list of the world's top 1,000 golfers. On his return to regular competition, Woods made steady progress to the top of the game, winning his first tournament in five years at the Tour Championship in September 2018 and his first major in 11 years at the 2019 Masters.

Woods has held numerous golf records. He has been the number one player in the world for the most consecutive weeks and for the greatest total number of weeks of any golfer in history. He has been awarded PGA Player of the Year a record 11 times and has won the Byron Nelson Award for lowest adjusted scoring average a record eight times. Woods has the record of leading the money list in ten different seasons. He has won 15 professional major golf championships (trailing only Jack Nicklaus, who leads with 18) and 82 PGA Tour events (tied for first all time with Sam Snead). Woods leads all active golfers in career major wins and career PGA Tour wins. He is the youngest player to achieve the career Grand Slam only four men before him have won career grand slam (Gene Sarazen, Ben Hogan, Gary Player and Jack Nicklaus), and the second golfer (after Nicklaus) to have achieved a career Grand Slam three times. Woods has won 18 World Golf Championships. He was also part of the American winning team for the 1999 Ryder Cup. In May 2019, Woods was awarded the Presidential Medal of Freedom, the fourth golfer to receive the honor.

On February 23, 2021, Woods was hospitalized in serious but stable condition after a single-car collision and underwent emergency surgery to repair compound fractures sustained in each leg in addition to a shattered ankle.

Woods was born in Cypress, California. His parents Earl (1932–2006) and Kultida (Tida) Woods (born 1944). He is the only child of their marriage. He does have two half-brothers, Earl Jr. (born 1955) and Kevin (born 1957), and a half-sister, Royce (born 1958) from the 18-year marriage of Earl Woods and his first wife, Barbara Woods Gray. Earl, a retired lieutenant colonel and Vietnam War veteran, was of mostly African American, as well as caucasian, and possible Native American and Chinese, ancestry. Kultida (nee Punsawad), originally from Thailand (where Earl had met her on a tour of duty in 1968), is of mixed Thai, Chinese, and Dutch ancestry. He refers to his ethnic make-up as "Cablinasian" (a syllabic abbreviation he coined from Caucasian, Black, American Indian, and Asian). 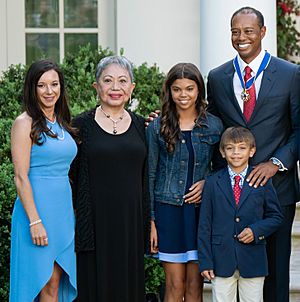 In November 2003, Woods became engaged to Elin Nordegren, a Swedish former model and daughter of former minister of migration Barbro Holmberg and radio journalist Thomas Nordegren. They were introduced during The Open Championship in 2001 by Swedish golfer Jesper Parnevik, who had employed her as an au pair. They married on October 5, 2004, at the Sandy Lane resort in Barbados, and lived at Isleworth, a community in Windermere, a suburb of Orlando, Florida. In 2006, they purchased a $39-million estate in Jupiter Island, Florida, and began constructing a 10,000-square-foot home; Woods moved there in 2010 following the couple's divorce.

Woods and Nordegren's first child was a daughter born in 2007, whom they named Sam Alexis Woods. Woods chose the name because his own father had always called him Sam. Their son, Charlie Axel Woods, was born in 2009.

On March 18, 2013, Woods announced that he and Olympic gold medal skier Lindsey Vonn were dating. They split up in May 2015.

Woods announced in November 2017 that he was in a relationship with restaurant manager Erica Herman.

All content from Kiddle encyclopedia articles (including the article images and facts) can be freely used under Attribution-ShareAlike license, unless stated otherwise. Cite this article:
Tiger Woods Facts for Kids. Kiddle Encyclopedia.