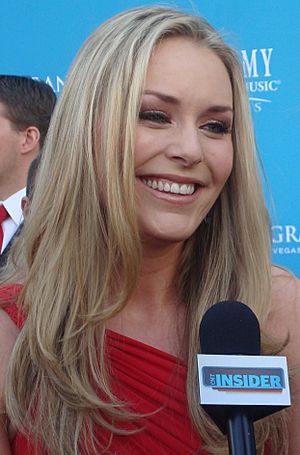 Lindsey Vonn (born on 18 October 1984 in Minnesota, USA) is an American athlete who competes in alpine skiing. She has won four Overall World Cup titles in the Audi Alpine Ski World Cup, three Downhill (an event that is won not by technicality, but speed, aptly named a 'speed event'), two Super-G (Short for Super Giant Slalom- also a speed event, but with more turns), and one Combined title ( one Downhill or Super-G run, and one Slalom run). These titles were won in the 2008, 2009, 2010, and 2012 World Cup Seasons.

Lindsey is also an Olympic gold medalist in Downhill and a bronze medalist in the Super-G, as of the 2010 Winter Olympic Games. Lindsey has also won two World Championship gold medals, both in 2009, and two silver medals, in 2007. Along with 33 World Cup victories, and eight World Cup Globes, Lindsey is said to be the best female US Ski Racer in history, and the best alpine racer in the history of the US Ski Team.

Her endorsements include that of Red Bull, Head Equipment, Uvex Goggles, Under Armour, Alka-Seltzer, Procter & Gamble, and Rolex. Lindsey is a Member of the US Ski Team and has been on the World Cup Circuit since December 21, 2000.

All content from Kiddle encyclopedia articles (including the article images and facts) can be freely used under Attribution-ShareAlike license, unless stated otherwise. Cite this article:
Lindsey Vonn Facts for Kids. Kiddle Encyclopedia.