Vail is a home rule municipality in Eagle County, Colorado, United States. The population of the town was 4,835 in 2020. The town, home to Vail Ski Resort, the largest ski mountain in Colorado, is known for its hotels, dining, and for the numerous events the city hosts annually, such as the Vail Film Festival, Burton US Open, Vail Resorts Snow Days, and Bravo! Vail. 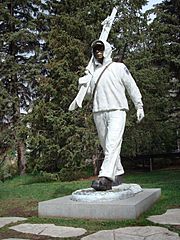 The "Ski Trooper" bronze sculpture by Scott Stearman in Slifer Plaza honors soldiers of the U.S. Army's 10th Mountain Division, which trained in the area during World War II.

Vail was incorporated in 1966, four years after the opening of Vail Ski Resort. The ski area was founded by Pete Seibert and local rancher Earl Eaton in 1962, at the base of Vail Pass. The pass was named after Charles Vail, the highway engineer who routed U.S. Highway 6 through the Eagle Valley in 1940, which eventually became Interstate 70. Seibert, a New England native, served in the U.S. Army's 10th Mountain Division during World War II, which trained at Camp Hale, 14 miles south of Vail between Red Cliff and Leadville. He was wounded in Italy at the Battle of Riva Ridge but went on to become a professional skier after he recovered.

Seibert, with other former members of the 10th Mountain Division, returned to Colorado after World War II with the intention of opening a ski resort. During training for ski troopers at Camp Hale, he bivouacked on Vail Mountain and identified it as an ideal ski mountain. In the early 1960s, Seibert raised funds from a group of Denver investors, including Jack Tweedy, and with Earl Eaton bought a ranch at the base of the mountain and eventually incorporated as Vail Associates. As plans continued for a new ski resort, Seibert hired Morrie Shepard as Vail's first ski school director. Shortly after, Shepard recruited Rod Slifer from Aspen to be assistant ski school director. Slifer also became the only real estate broker in the early years of Vail and would later be the broker in the transaction that allowed Vail to buy a ranch, now known as the world-famous Beaver Creek.

In December 1962 Vail officially opened for its first season. It operated a gondola lift and two ski lifts on the mountain owned by the United States Forest Service. The village was established at the base of the mountain for local residents and offered lodging for visitors. It quickly grew throughout the valley with housing added first in East Vail and then West Vail, and additional lodging added in Lionshead in the late 1960s. Within the first years the village had a ski shop operated by John Houserman, a hotel and restaurant operated by Pepi Gramshammer, and the mountain had a manager. By 1969 Vail was the most popular ski resort in the state. In 1988 Vail opened China Bowl, making Vail the largest ski area in North America.

The town is surrounded by the White River National Forest and the Vail Ski Resort is leased from the United States Forest Service. Mount of the Holy Cross is visible from Vail Mountain.

Vail has warm summers and cold winters because of its elevation. Depending on the classification used, it is either an alpine or subarctic climate transitional with humid continental due to the mild daytime temperatures in September bringing the daily mean to around 50 °F (10 °C). Minimum temperatures rarely rise above freezing point from late September to late May. The town receives an average of 200 inches of snowfall per season, with even more in the surrounding mountains. Roads may close occasionally during heavy snowfall. Summer temperatures can reach the 80s, but are more often in the mid to high 70s. Combined with mountain breezes, this makes summers refreshing and cool. For being a borderline subarctic climate daytime temperatures are very mild, indicating high diurnal temperature variation due to the altitude. 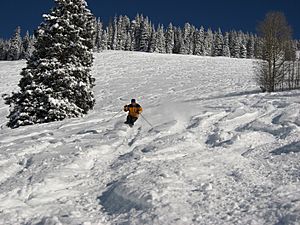 Vail is served by Eagle County Airport near Gypsum, 30 miles (48 km) to the west. Native Americans used to call the area near the airport the "hole in the sky" because storms seemed to avoid it. Vail is modeled on European ski towns, many of which are car-free, and the town is partially pedestrianized. The town operates the largest free shuttle bus system in the United States and has ten hybrid-electric buses. At each bus stop, a sign reports when the next two buses will arrive.

The in-Town Shuttle provides service every five minutes during peak winter times, and every 15 minutes off-peak, between Golden Peak, Vail Village, the business district, and Lionshead, with live schedule information provided at bus stops by Global Positioning System technology, which tracks buses. Other routes centering on the Transportation Center service the East and West Vail districts on a scheduled, but less frequent basis.

The Colorado Department of Transportation, though its Bustang program, provides intercity transportation to Vail along its West Line. The West Line goes from Denver to Grand Junction and back.

Interstate 70 runs east–west through the middle of Vail and is the only road to or from Vail, with exits at East Vail, at the base of Vail Pass, the town of Vail, and West Vail. From the east, the highway comes from Denver, 97 miles (156 km) away, passes through Eisenhower Tunnel and over the Continental Divide, by-passing Loveland Pass, and over Vail Pass, dropping down into Vail Valley. To the west, it meets U.S. Highway 24 at Dowd Junction, passes through Avon, Edwards, Colorado, and Eagle, through Glenwood Canyon traveling and on to Grand Junction, and reaches Utah, where it ends at the intersection with Interstate 15.

In West Vail, U.S. Highway 6 (which still exists as a service road between East Vail, Vail, and West Vail) merges with I-70 at Dowd Junction. I-70 roughly follows the original Highway 6 route until the two highways diverge again in Silverthorne, 31 miles (50 km) to the east. 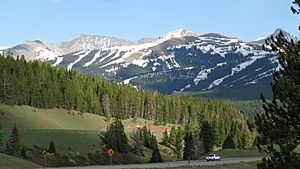 Vail Pass is one of Colorado's mountain passes located in the Rocky Mountains, and carries I-70 between Copper Mountain (pictured) and Vail.

Taste of Vail, First week of April: The iconic food and wine event of Vail

Vail, Colorado is featured in the music video "Walk This Way" by MØ. In the video, MØ can be seen wearing a crew cut sweatshirt with "Vail, Colorado" written across the front.

The Vail economy relies heavily on tourism. The main attraction in Vail is winter sports such as skiing and snowboarding on the mountain, in addition to snowmobiling and snowshoeing, among many other winter sports. Vail is also a summer resort and golfing center. Summer activities include guided hikes, mountain biking, horseback riding, carriage rides and fishing. Vail is also developing as a cultural center, with various art and music venues active throughout the summer. The town has a developed culinary center, with a variety of restaurants.

All content from Kiddle encyclopedia articles (including the article images and facts) can be freely used under Attribution-ShareAlike license, unless stated otherwise. Cite this article:
Vail, Colorado Facts for Kids. Kiddle Encyclopedia.