Mount of the Holy Cross facts for kids

Mount of the Holy Cross was named for the distinctive cross-shaped snowfield on its northeast face. Under USDA Forest Service administration, the mountain was proclaimed "Holy Cross National Monument" by Herbert Hoover on May 11, 1929. The monument was transferred to the National Park Service in 1933. In 1950, it was returned to the Forest Service and lost its National Monument status—the number of visitors to the mountain and the nearby "Pilgrim's Hut" had waned, and the expense of full-time staff could not be justified.

This mountain has been the subject of painters, photographers and even a poem by Henry Wadsworth Longfellow, ("The Cross of Snow"). The first publicly available photograph was published in National Geographic magazine. Thomas Moran depicted the mountain in an oil painting, which now is part of the collection of the Museum of the American West, part of the Autry National Center in Los Angeles, California. It is still much photographed but it is not as well known today as it was in the past.

Nearby features include Bowl of Tears Lake, directly under the east face of the peak, Tuhare Lakes, in a cirque that lies south of a significant subpeak, and several other lakes. Notable locations within 35 mi (56 km) include the Dotsero volcano (near Interstate 70), Vail and Aspen. US 24 runs near the peak through Gilman. 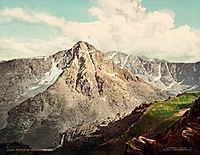 Photochrom print of Mount of the Holy Cross c. 1900. This image is a reversed view of the mountain compared to how it actually appears.

The first recorded ascent of Holy Cross was in 1873, by F. V. Hayden and photographer W. H. Jackson during one of Hayden's geographical surveys. However, the peak may well have been ascended previously by miners or American Indians. The first winter ascent of the peak was made in 1943 by Russel Keene and Howard Freedman of the 10th Mountain Division, then stationed at Camp Hale.

The mining town of Holy Cross City was established in 1880 to serve the growing mining operations around the region. In 1883, the Holy Cross City Trail was built to the town, but the town was depopulated from a peak of 600 people the next year.

Holy Cross can be climbed by at least four different routes, with the easiest and most common route being the North Ridge, which involves 5,000 feet (1,500 m) of vertical gain over 11.5 mi (18.5 km) and is rated YDS Class 2 for moderate scrambling. The Cross Couloir route forms the vertical portion of the famous cross feature, and provides an advanced snow climb or extreme ski descent. 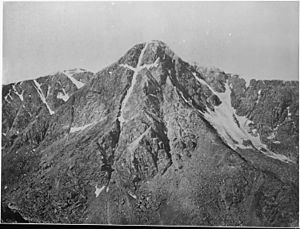 Photo by William Henry Jackson ~ circa 1873

Mount of the Holy Cross has a history of endangering the lives of many hikers. Although the summit on Mount of the Holy Cross is frequently reached on a long day hike, hikers have become stranded or lost through missing the right turn down the ridgeline, heading straight down and into the wilderness; research and planning of the route is important to prevent tragedies. Efforts to improve safety have been made by the Colorado Fourteeners Initiative.

All content from Kiddle encyclopedia articles (including the article images and facts) can be freely used under Attribution-ShareAlike license, unless stated otherwise. Cite this article:
Mount of the Holy Cross Facts for Kids. Kiddle Encyclopedia.