The Sawatch Range is a high and extensive mountain range in central Colorado which includes eight of the twenty highest peaks in the Rocky Mountains, including Mount Elbert, at 14,440 feet (4,401 m) elevation, the highest peak in the Rockies.

The Sawatch mountains in general are high, massive, and relatively gentle in contour. While some peaks are rugged enough to require technical climbing, most can be climbed by a simple, yet arduous hike. Notable summits include Mount Elbert, Mount Massive, La Plata Peak, Mount of the Holy Cross, and the Collegiate Peaks (Mounts Columbia, Harvard, Princeton, Yale, Belford, and Oxford).

State Highway 82 traverses the range at Independence Pass (Colorado). It is also traversed by Cottonwood Pass, which connects the town of Buena Vista with Gunnison County. Both Independence Pass and Cottonwood Pass are over 12,000 feet (3,658 m), making them 2 of the highest passes in Colorado and are typically open only from late spring to mid autumn. Hagerman Pass is another pass to the north, connecting the Arkansas Headwaters near Leadville with the upper valley of the Fryingpan River. Hagerman Pass is traversable with four-wheel drive vehicles and on foot during summer and early autumn months. The range contains numerous hiking trails within the San Isabel National Forest and White River National Forest. 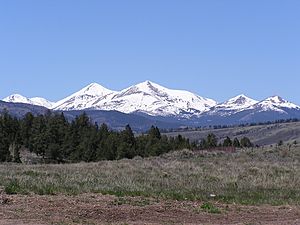 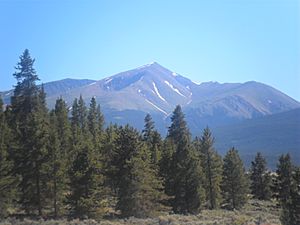 Mount Elbert, the highest peak in the Rocky Mountains. 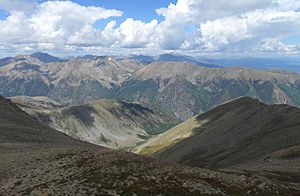 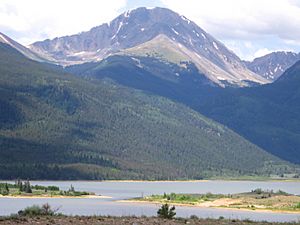 All content from Kiddle encyclopedia articles (including the article images and facts) can be freely used under Attribution-ShareAlike license, unless stated otherwise. Cite this article:
Sawatch Range Facts for Kids. Kiddle Encyclopedia.