Mount Massive is the second-highest summit of the Rocky Mountains of North America and the U.S. state of Colorado. The prominent 14,428-foot (4,398 m) fourteener of the Sawatch Range is located in the Mount Massive Wilderness of San Isabel National Forest, 10.6 miles (17.1 km) west-southwest (bearing 247°) of the City of Leadville in Lake County, Colorado, United States. Mount Massive edges out the third-highest summit of the Rockies, Mount Harvard, by 7 feet (2.1 m), but falls short of Mount Elbert by 12 feet (3.7 m). It ranks as the third-highest peak in the contiguous United States after Mount Whitney and Mount Elbert.

Mount Massive was first surveyed and climbed in 1873 during the Hayden Survey of the American West. Survey member Henry Gannett is credited with the first ascent. Its name comes from its elongated shape: it has five summits, all above 14,000 ft (4,300 m), and a summit ridge over 3 mi (4.8 km) long, resulting in more area above 14,000 ft (4,300 m) than any other mountain in the 48 contiguous states, narrowly edging Mount Rainier in that category. Mount Elbert (14,440 ft (4,400 m)) is Mount Massive's nearest neighbor among the fourteeners; it lies about 5 mi (8.0 km) south-southeast of the peak. 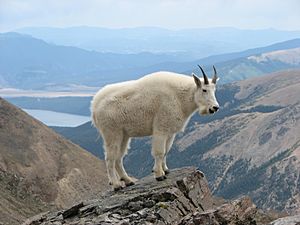 A matter of some contention after the Great Depression arose over the heights of Massive and its neighbor, Mount Elbert, which have a height difference of only 12 feet (3.7 m). This led to an ongoing dispute which came to a head with the Mount Massive supporters taking it upon themselves to build large piles of stones on the summit to boost its height, only to have the Mount Elbert proponents demolish them.

There are several glacial lakes in the wilderness area. The lower slopes of the mountain are covered in lodgepole pine forests, which gradually yield to Engelmann Spruce and Fir. Treeline is just below 12,000 feet. Among the mountain's fauna are the American pika, the mountain goat, elk, mule deer, moose, Canada jay, martin, and the yellow-bellied marmot.

All content from Kiddle encyclopedia articles (including the article images and facts) can be freely used under Attribution-ShareAlike license, unless stated otherwise. Cite this article:
Mount Massive Facts for Kids. Kiddle Encyclopedia.