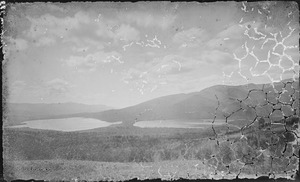 Lake County is one of the 64 counties in the U.S. state of Colorado. As of the 2010 census, the population was 7,310. The county seat and the only municipality in the county is Leadville. The highest natural point in Colorado and the entire Rocky Mountains is the summit of Mount Elbert in Lake County at 14,440 feet (4401.2 meters) elevation.

Lake County was one of the original 17 counties created by the Colorado legislature on November 1, 1861. As originally defined, Lake County included a large portion of western Colorado to the south and west of its present boundaries. The county was named for Twin Lakes.

Placer gold was found at Colorado Gulch in 1863 as part of the Colorado Gold Rush.

With its many reductions in size, Lake County's designated county seat also changed multiple times within just a few years, residing successively in Oro City (from 1861), Lourette (from 1863), Dayton (from 1866), and Granite (from 1868).

By 1878, Lake County had been reduced to an area including only present-day Lake and Chaffee counties. On February 8, 1879, the Colorado legislature renamed Lake County as Carbonate County, although this designation name only lasted for two days, until Chaffee County was split off from Carbonate's southern section on February 10 and the remaining northern portion was redesignated Lake County with its current county seat of Leadville.

Outlast is set in a fictional asylum in Lake County. 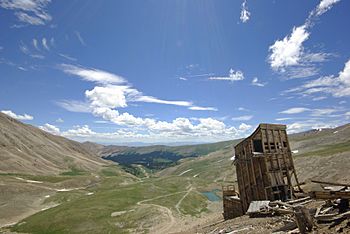 The historic Hilltop Mine on Mount Sherman is a popular attraction for hikers and photographers.
1890s(?) building in Stumptown, in the Leadville mining district.

All content from Kiddle encyclopedia articles (including the article images and facts) can be freely used under Attribution-ShareAlike license, unless stated otherwise. Cite this article:
Lake County, Colorado Facts for Kids. Kiddle Encyclopedia.