Eagle County is one of the 64 counties of the U.S. state of Colorado. As of the 2010 census, the population was 52,197. The county seat is the Town of Eagle. The county is named for the Eagle River.

Eagle County was created by the Colorado legislature on February 11, 1883, from portions of Summit County. It was named after the Eagle River, which runs through the county. The county seat was originally set in Red Cliff, Colorado, but was moved to the town of Eagle in 1921.

The Ground Hog Mine, near Red Cliff, produced gold and silver in two vertical veins in 1887. One vein, or "chimney", contained gold in crystalline form, cemented by iron, while the other contained wire gold in the form of "ram's horns". One of these ram's horns is now on display in the Harvard Mineralogical Museum. 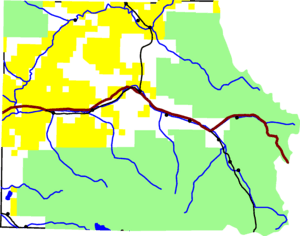 A map of Eagle County. Green is White River National Forest, yellow is Bureau of Land Management land. The reddish line from east to west is Interstate 70, running along Eagle River.

Much of the county is taken up by White River National Forest, and much of the rest is managed by the Bureau of Land Management. Interstate 70 crosses the county from east to west.

The Eagle River rises in the southeastern part of the county. It receives Gore Creek at Dowds Junction, and joins the Colorado River in the west. Fryingpan River and the Roaring Fork River intersect the southwest corner of the county.

All content from Kiddle encyclopedia articles (including the article images and facts) can be freely used under Attribution-ShareAlike license, unless stated otherwise. Cite this article:
Eagle County, Colorado Facts for Kids. Kiddle Encyclopedia.