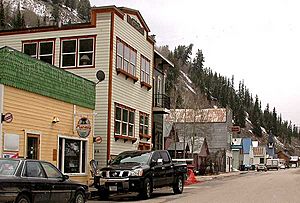 View along the main street in Red Cliff 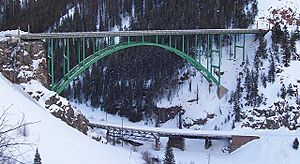 Red Cliff (sometimes spelled Redcliff) is a statutory town in Eagle County, Colorado, United States. The population was 267 at the 2010 census. The town is a former mining camp situated in the canyon of the upper Eagle River just off U.S. Highway 24 north of Tennessee Pass. The town site is concealed below the highway (which passes over the Red Cliff Truss Bridge) and is accessible by a side road leading to Shrine Pass in the Sawatch Range. It was founded in 1879 during the Colorado Silver Boom by miners from Leadville who came over Tennessee Pass scouting for better prospects. The name derives from the red quartzite cliffs surrounding the town. As the first community in the Eagle Valley, it served temporarily as the first county seat of Eagle County (formed out of Summit County in 1883) until the relocation of the county seat to Eagle in 1921.

The town consists of a cluster of older homes and converted trailers on the flanks of the canyon around the river, as well as a post office, a historic church and older wooden structures along the main street of the town. Several of the older structures have been converted in recent years into modern businesses, including a restaurant. The town is located within easy driving distance of nearby ski areas, and the revival of the town has given rise to a new inn housed in one of the downtown structures.

In winter, the town serves as a popular access point to Shrine Pass for cross-country skiing, snowshoeing and snowmobiling. In recent years, a car shuttle has operated between the town and nearby Vail, allowing visitors to Vail easy access to the pass.

In 2008, the town of Minturn annexed around 4,000 acres (16 km2) for a proposed Battle Mountain Resort, which also included the abandoned mining town of Gilman. With the expansion, Minturn is now Red Cliff's immediate neighbor to the north.

According to the United States Census Bureau, the town has a total area of 0.2 square miles (0.6 km2), all of it land.

There were 109 households out of which 26.6% had children under the age of 18 living with them, 49.5% were married couples living together, 9.2% had a female householder with no husband present, and 36.7% were non-families. 22.9% of all households were made up of individuals and 4.6% had someone living alone who was 65 years of age or older. The average household size was 2.65 and the average family size was 3.16.

All content from Kiddle encyclopedia articles (including the article images and facts) can be freely used under Attribution-ShareAlike license, unless stated otherwise. Cite this article:
Red Cliff, Colorado Facts for Kids. Kiddle Encyclopedia.