Minturn is a home rule municipality in Eagle County, Colorado, United States. The town population was 1,027 at the 2010 United States Census.

Minturn is located in southeastern Eagle County on the Eagle River between the resort communities of Vail and Beaver Creek. The town limits extend 2 miles (3 km) northwest along U.S. Route 24 to Interstate 70 at Exit 171, from which point it is 5 miles (8 km) east to Vail and 5 miles west to Avon at the base of Beaver Creek Resort. Eagle, the county seat, is 25 miles (40 km) to the west, and Denver is 101 miles (163 km) to the east. US 24 leads south 30 miles (48 km) over the Continental Divide at Tennessee Pass to Leadville.

Minturn is surrounded on three sides by White River National Forest, with the Holy Cross Wilderness bordering the southwest side of the town. The national forest offers hiking, biking, snowshoeing, cross country skiing, and other recreational opportunities. Five huts operated by the Tenth Mountain Hut Association along with their associated trail systems are found in the local Eagle-Holy Cross ranger district. Camp Hale, a World War II winter training site now on the National Register of Historic Places, is situated toward the south end of the district.

The Holy Cross District lies on the northern extent of the Sawatch Range and the western flank of the Gore Range. It includes the forest areas surrounding the towns of Vail, Minturn, Red Cliff and Avon. To the north, the district takes in much of the Piney River and Sheephorn Creek drainages.

The upper Eagle River provides a variety of scenic, outdoor recreation opportunities along its 20+ mile stretch from Tennessee Pass to Dowd Junction. For river enthusiasts, fishing, rafting, kayaking and canoeing are plentiful. Floating season generally occurs from late May through July. Access to the river is available from several public access points along Highway 24. 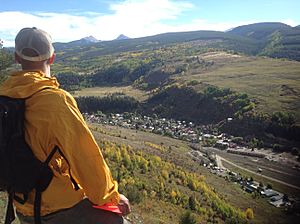 There were 399 households out of which 27.3% had children under the age of 18 living with them, 48.9% were married couples living together, 7.5% had a female householder with no husband present, and 38.6% were non-families. 20.1% of all households were made up of individuals and 1.8% had someone living alone who was 65 years of age or older. The average household size was 2.68 and the average family size was 3.14. 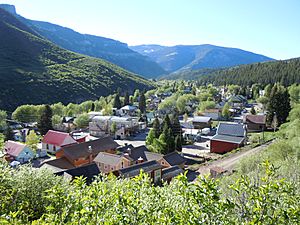 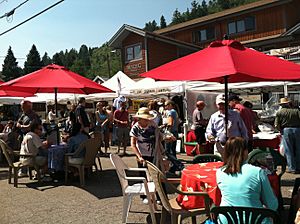 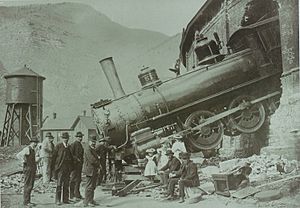 The town is named for Robert Bowne Minturn, Jr., who was vice president of the Denver and Rio Grande Western Railroad that founded the town. He was also a member of Grinnell, Minturn & Co.

Minturn's oldest families settled at the confluence of Gore Creek and the Eagle River in the late 1800s. Some created homesteads and farmed the land, while others mined silver in the mountains high above town. With the arrival of the Denver & Rio Grande Railroad in 1887, Minturn quickly developed into a booming crossroads for transportation and industry. By the turn of the century, a growing population of mining and railroad workers and their families raised the demand for business and services in town. In response, Minturn was incorporated on November 15, 1904.

Minturn has adapted to several major changes in the local economy over the decades, including the development of Vail and Beaver Creek ski resorts, the closing of the Gilman mine, and the abandonment of rail lines through Minturn. Despite this transformation from the Old West to the new, Minturn maintains its distinctive character, architecture and quality of life.

Minturn is served by Eagle County Regional Airport near Gypsum, 30 miles (48 km) to the west.

Interstate 70 runs east–west two miles north of Minturn. Highway 24 runs east–west through Minturn, and to the east leading to the towns of Red Cliff and eventually Leadville.

All content from Kiddle encyclopedia articles (including the article images and facts) can be freely used under Attribution-ShareAlike license, unless stated otherwise. Cite this article:
Minturn, Colorado Facts for Kids. Kiddle Encyclopedia.