Kids Encyclopedia Facts
Not to be confused with Post box. 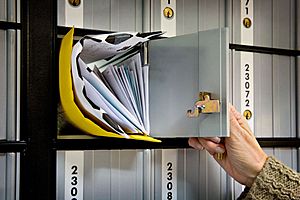 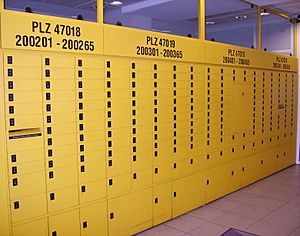 PO boxes of various sizes in a German post office, with their number range and postcodes written above them 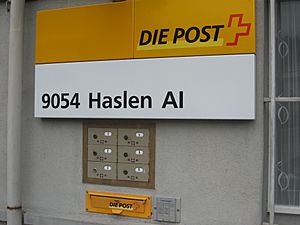 Outdoor Post Office Boxes (as common in Switzerland) numbers one to six at 9054 Haslen, Switzerland.

A post office box (commonly abbreviated as P.O. box, or also known as a postal box) is a uniquely addressable lockable box located on the premises of a post office station.

In some regions, particularly in Africa, there is no door to door delivery of mail; for example, in Kenya. Consequently, renting a PO box has traditionally been the only way to receive mail in such countries. However, some countries, like Egypt, have introduced mail home delivery.

Generally, post office boxes are rented from the post office either by individuals or by businesses on a basis ranging from monthly to annual, and the cost of rent varies depending on the box size. Central business district (CBD) PO boxes are usually more expensive than rural PO boxes.

In the United States, the rental rate used to be uniform across the country. Now, however, a postal facility can be in any of seven fee groups by location; in addition, certain customers qualify for free box rental, usually because the Postal Service does not offer carrier-route delivery to their physical addresses.

In the United Kingdom, Royal Mail PO boxes are often little more than pigeon-holes in the secure section of a sorting office and are accessible only by staff. In such cases, the renter of the PO box will be issued with a card showing the PO box number and delivery office name and must produce this to the desk staff when collecting mail. For an additional fee, the Royal Mail will deliver received items to the renter's geographical address.

Some private companies (e.g., United Parcel Service and commercial mail receiving agencies) offer similar services of renting a mailbox in a public location. The difference is that mail sent there is addressed to a street address (along with the private box number), instead of just addressed to "PO Box CSX". Virtual mailboxes are similar to P.O. boxes but usually provide additional services such as scanning or forwarding.

In Australia, wall-mounted PO boxes come in five sizes: small, medium, large, jumbo and A4. The different sizes boxes can be mixed almost completely arbitrarily on the wall. There is also an option for locked private bag which comes in two different sizes as well: small and large.

All content from Kiddle encyclopedia articles (including the article images and facts) can be freely used under Attribution-ShareAlike license, unless stated otherwise. Cite this article:
Post office box Facts for Kids. Kiddle Encyclopedia.