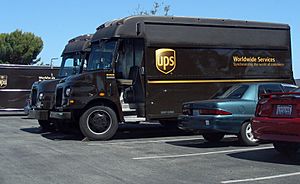 United Parcel Service (UPS) is an American company that transports packages. It is the largest package delivery company in the world. UPS delivers more than 14 million packages a day to more than 200 countries. It is based in Sandy Springs, Georgia, USA. The company started in 1936 when several smaller companies merged and took the new name. It was owned by employees until 1999 when it offered stock to outsiders.

The company uses brown uniforms and delivery trucks. The company trademarked the color so other delivery companies cannot use a brown logo.

UPS Airlines is a part of UPS that handles the transportation of packages over long distances and between countries. UPS has almost 300 airplanes in its fleet.

All content from Kiddle encyclopedia articles (including the article images and facts) can be freely used under Attribution-ShareAlike license, unless stated otherwise. Cite this article:
United Parcel Service Facts for Kids. Kiddle Encyclopedia.